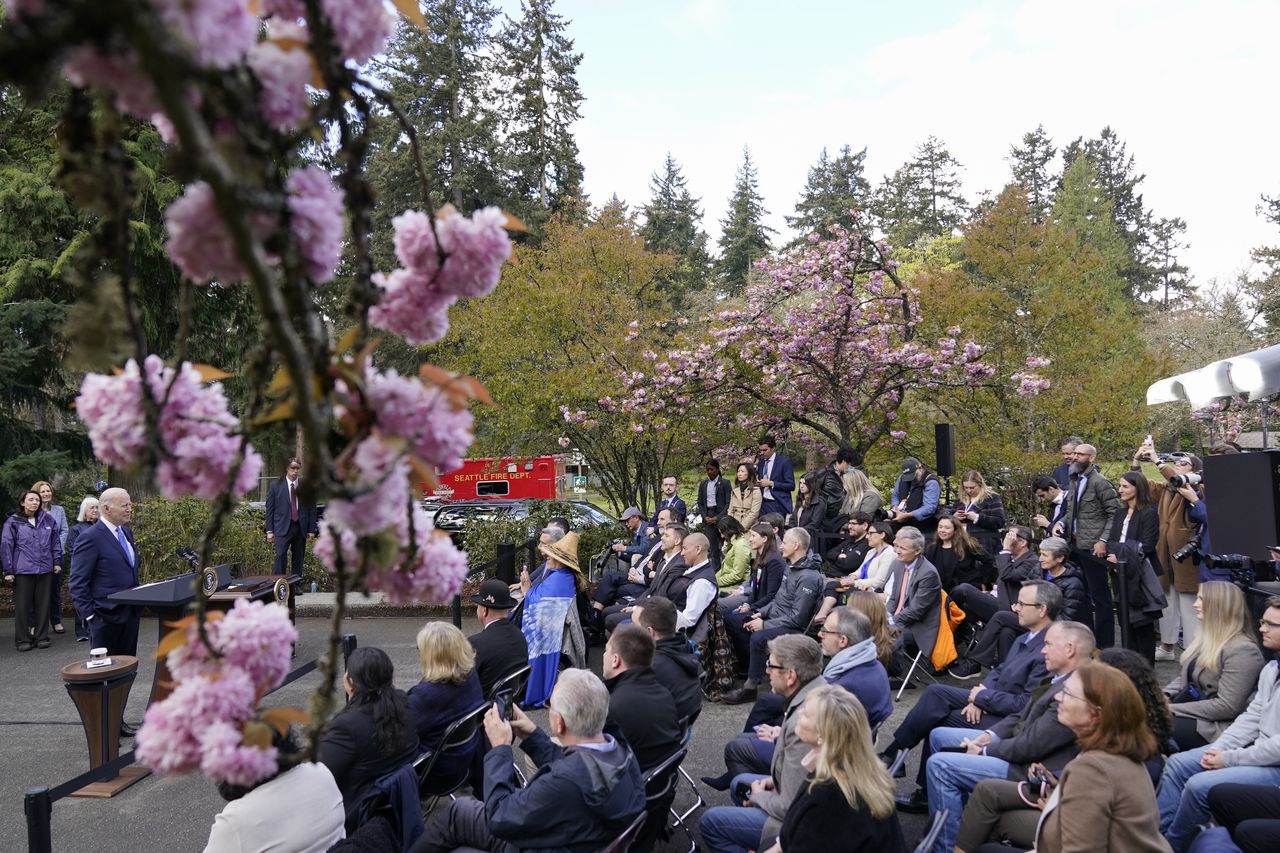 President Joe Biden signed an executive order during his visit to Seattle on Friday that aims to protect mature and old-growth forests on federal lands, step up forest maintenance and tree-planting projects across the country, and combat global climate change by increasing diplomatic efforts to counter aggressive attacks. logging in the Amazon, Africa and Southeast Asia.

Among other things, the order directs the U.S. Forest Service and the Bureau of Land Management to define and inventory mature and old-growth forests within one year and develop policies to protect them from climate change and forest fire risk.

“We’ve come to a point where the crisis on the environment has become so obvious, with the notable exception of the former president, that we really have an opportunity to do things that we couldn’t have done there. is two, five, ten years old,” Biden said before sitting down to sign the order in Seattle’s Seward Park.

The order centers on some of Oregon’s most tense politics. It’s loaded with wildfire risk reduction language — packaging perhaps designed to make it more palatable to rural communities and the lumber industry, which have long pushed the federal government to “manage” the forests more aggressively by intensifying logging.

Significant funding for forest restoration in the federal infrastructure bill will almost certainly bring new jobs to these communities and more logs to local mills. But Friday’s executive order was clearly focused on protecting trees, increasing carbon storage in forests and delivering on the administration’s climate agenda.

Nick Smith, spokesman for the forest industry group American Forest Resource Council, said in an email Friday that the federal government should focus on reducing emissions from large wildfires by managing unhealthy and overcrowded federal forests and by providing wood products that store carbon.

“We are concerned that the executive order will only add more bureaucracy to our broken federal forest management system and divert more resources from the work that needs to be done on the ground right now,” he said.

But the order to inventory and protect “mature forests” is being welcomed by environmental groups, who say the biggest threat to forests and the climate still comes from chainsaws, not wildfires. They are cautiously optimistic that the order will establish long-sought policy safeguards on what can and cannot be cut, preventing agencies from scaling back old growth that still exists and establishing protections for mature trees that are crucial. for carbon storage.

“It’s not enough to protect the remaining old-growth forests,” said Steve Pedery, director of conservation at Oregon Wild. “It’s the trees that are growing, those stands over 80 years old, that are important. We are delighted to see them include these mature forests in the order.

Together, the Forest Service and BLM manage approximately 30 million acres of land in Oregon, making them the largest land managers in the state. Most of Oregon’s true old-growth forests have already been logged, but its rainforests west of the Cascades are among the most vibrant and carbon-dense in the world.

The Earth Day executive order also comes as the first tranche of $8 billion in forest-related money included in the federal infrastructure bill begins to flow. Some $5 billion is earmarked to reduce fire risk in the country’s forests by thinning small trees, clearing dead vegetation and introducing more prescribed fires into the woods. It will also fund other wildfire mitigation programs across the country, including a $1 billion grant program for community wildfire defense and $600 million to boost firefighter salaries. .

It remains unclear how much of that funding will come to Oregon. But where to spend it is already the subject of deep controversy.

Earlier this month, the Forest Service released an initial list of forest restoration projects that will be funded through the infrastructure bill. It includes $4.5 million in 2022 to clean up 5,000 acres in the Deschutes National Forest, and another $37 million over the next two years to eventually treat 50,000 acres northwest of Bend.

This week, the senses. Ron Wyden and Jeff Merkley announced $11.7 million in additional funding – in part from the Infrastructure Bill – that will go to five projects around the state to “clear up overgrown forests, support better ecosystems, reduce the threat of forest fires and create more jobs.”

The money comes as local residents of Bend is furious with the forest service for a lumber sale that involved the felling of older, fire-resistant trees along a popular out-of-town mountain bike trail in the name of wildfire prevention. This is just one example of the type of timber sales in the state where environmentalists say federal agencies are offering older trees to make sales more economically attractive to logging companies.

“It’s Oregon’s dirty little secret,” Pedery said, pointing to sale of wood on the BLM land west of the Cascades “where we enthusiastically exploit the old stands. We just don’t tell anyone.

Biden’s executive order does not prohibit the logging of mature or old trees, or provide them with new protections. But agencies are required to produce the inventory in an expedited timeframe, publish it for public comment, and develop “science-based” policies that address wildfire threats and climate impacts.

The infrastructure bill will dramatically expand reforestation projects on federal lands, and the order directs agencies to develop a plan to boost cone and seed collection and expand nursery capacity.

It also asks the State Department to detail how to reduce or eliminate U.S. purchases of agricultural products grown on illegally or recently deforested land, and to coordinate with other agencies to use foreign aid, trade tools, and funding mechanisms to combat aggressive logging internationally.

One year after taking office Amid a flurry of climate-related pledges, Biden’s ambitious climate agenda has been marred by setbacks. The President welcomed a virtual summit on global warming at the White House on the last Earth Day. He took the opportunity to nearly double the United States’ target for reducing greenhouse gas emissions, propelling the country to the forefront in the fight against climate change.

One year later, its most radical proposals remain at a standstill on Capitol Hill despite renewed warnings from scientists that the world is hurtling towards a dangerous future marked by extreme heat, drought and weather.

Sales of lumber from federal forests nationwide have more than doubled in the past 20 years as Republicans and Democrats pushed for more aggressive thinning to prevent wildfires.

While the Forest Service and BLM have allowed the felling of older trees for years, former U.S. Forest Service deputy chief Jim Furnish said infrastructure funding will reduce the need for agencies to subsidize thinning of smaller trees and removal of flammable vegetation by including old trees in their sales.

Many conservationists and academics believe that mechanical thinning projects, unless applied surgically, are an inefficient and costly Sisyphean task that damages forest soils, removes carbon, and must be revisited regularly as that small trees and vegetation grow back. They believe that such treatments actually increase fire risk by opening up the canopy, drying out the soil and allowing wind-driven fires to spread faster. They say federal funding would be better spent helping to make homes safer from fires and start defensible space projects in at-risk communities.

Dominic DellaSala, chief scientist at Wild Heritage, an organization focused on protecting forests, said the executive order was a good first step. But, he said, the process needs to move quickly because the peer-reviewed science already exists, researchers know where mature and old-growth forests are, and understand the threats to them.

His biggest concern is that the Forest Service will be swimming in money, targeting large landscapes, and potentially tackling large trees as the process moves forward.

“It’s all in the fine print,” he said. “Hopefully what we will see in the meantime is a halt in logging in mature and old-growth forests. This must stop for the process to take place.

-The Associated Press contributed to this story.