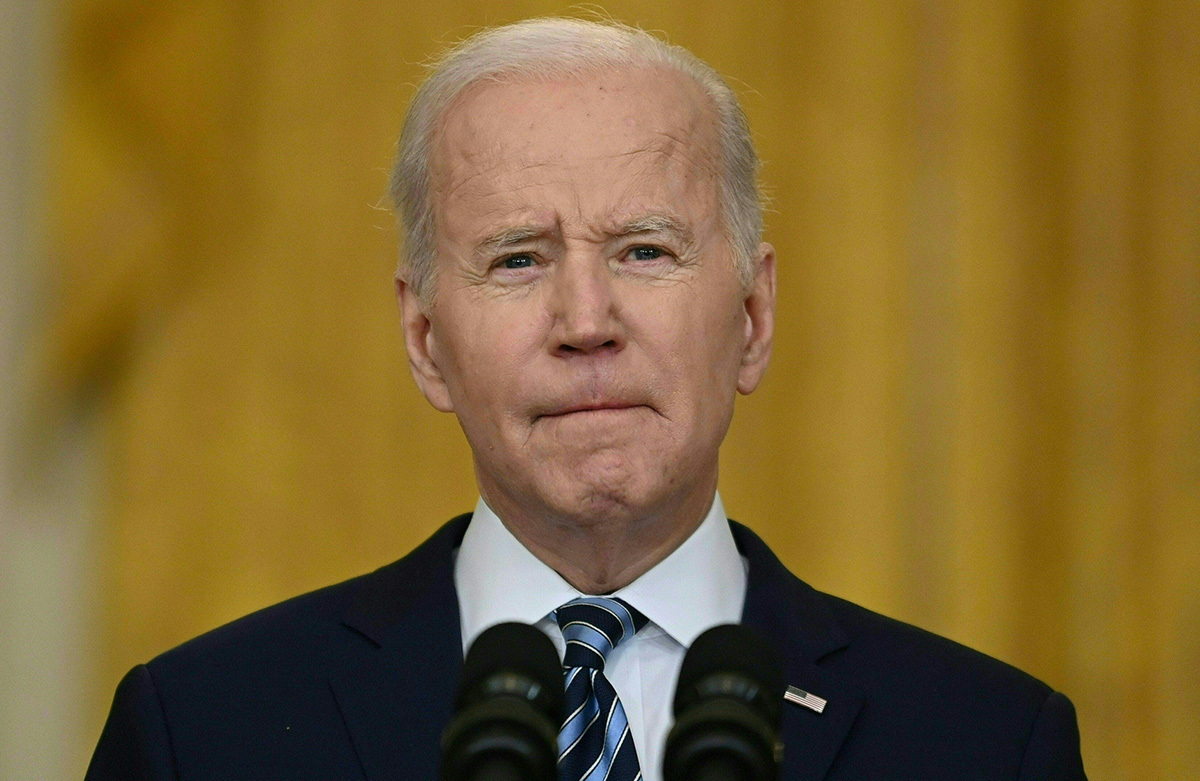 Lamenting the “premeditated attack,” Biden claimed that “Vladimir Putin had been planning this for months.”

“This is a dangerous moment for all of Europe, for freedom in the world,” he said.

While the 79-year-old president spent much of his speech discussing the peril of the situation, he remained optimistic about the future.

“In the struggle between democracy and autocracy, between sovereignty and subjugation, make no mistake. Freedom will prevail,” he said.

Biden insisted that all available diplomatic options had been exhausted before indicating that he had authorized “strong additional sanctions and new limitations on what can be exported to Russia.”

He argued that the additional sanctions “would impose significant costs on the Russian economy, both immediately and over time.”

“We deliberately designed these sanctions to maximize the long-term impact on Russia and to minimize the impact on the United States and our allies,” he said.

Biden touted a coalition of partners, including 27 members of the European Union, Britain, Canada, Japan, Australia, New Zealand and others.

Biden had spoken with leaders of the G7, a coalition of the world’s largest democracies, earlier in the day. He said they were “fully and totally in agreement” in determining that “we will limit Russia’s ability to do business in dollars, euros, pounds and yen to be part of the global economy.” .

He cited the efforts of existing sanctions on the Russian economy and the strength of the Russian currency as evidence that the approach would work.

The new sanctions will extend to four additional banks in Russia, meaning “all assets they have in America will be frozen”. They will also apply to members of the “Russian elites” who have “personally benefited from Kremlin policy”.

“Between our actions and those of our allies and partners, we estimate we will cut more than half of Russia’s high-tech imports,” Biden predicted. “It will be a blow to Putin’s long-term strategic ambitions.”

Biden said NATO, a group of nations formed during the Cold War to counter the Soviet Union, will convene a summit on Friday. The summit “will bring together the leaders of 30 Allies and Close Partners to affirm our solidarity and define the next steps we will take to further strengthen all aspects of our NATO alliance”.

The president swore that “American forces are not and will not be engaged in the conflict with Russia and Ukraine” and acknowledged the presence of American troops in Europe “to defend our NATO allies and reassure those allies in the east”.

Addressing the potential impact of heightened tensions with Russia on the price of gasoline in the United States, Biden said his administration was using “every tool at its disposal to protect American families and businesses from rising prices. at the gas pump”.

Biden insisted that “this aggression cannot go unaddressed” because “America stands up to bullies, we stand up for freedom.”

Biden detailed a conversation he had with Ukrainian President Volodymyr Zelensky. The president pledged his support for the Ukrainian people and pledged to provide “humanitarian aid” to the Eastern European country.

In response to a reporter’s question, Biden said he had “no intention of speaking to Putin.”

He told another reporter that “[t]The idea that this will last for a long time is highly unlikely as long as we remain determined to impose the sanctions that we are going to impose on Russia.

Biden has pushed back against the idea that sanctions won’t change Putin’s mind about taking further action in Ukraine, as sanctions have failed to deter him so far.

He concluded that imposing sanctions rather than just threatening sanctions would “weaken” Russia so that Putin “will have to make a very, very difficult choice as to whether he should continue to become a second-rate power or , in fact, answer.”

In addition to the reaction from world political leaders, religious groups have also condemned Russia’s aggression against Ukraine.

The Ukrainian Council of Churches and Religious Organizations released a statement on Thursday expressing disappointment that “the efforts to prevent the outbreak of war by many people around the world, including our Council, have not been successful.” .

“Truth and the international community are on the Ukrainian side,” the statement said. “We believe good will prevail with God’s help. We support the Armed Forces of Ukraine and all its defenders, we bless them in their defense of Ukraine against the aggressor and offer our prayers for them.