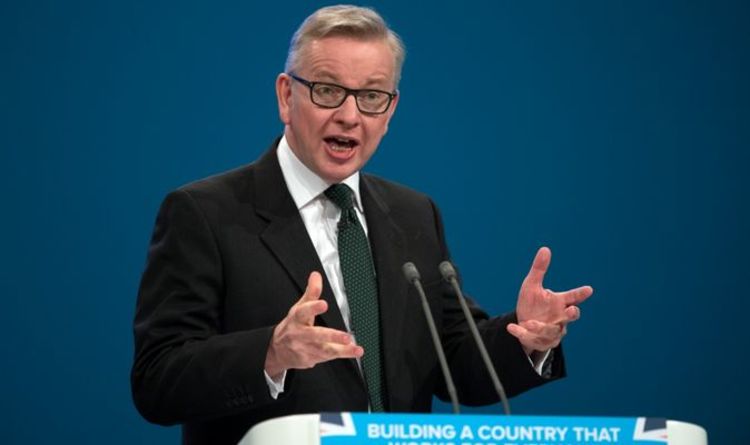 Patricia Gibson, MP for North Ayrshire & Arran, asked the Scottish-born Tory: “So will he comment on the veracity of the specific remarks made by the Hon. MP for Hazel Grove (William Wragg) about the threats made against Tory MPs for withdrawing investments from their constituents and publishing negative press articles as punishment for supporting a vote of no confidence in the Prime Minister?

“Will he outline what investigations he intends to undertake to examine the abuse, or possible abuse, of leveling funds?”

Mr Gove, who campaigned with Mr Johnson during the Vote Leave campaign in 2016, responded by saying: “There is no evidence of abuse of leveling funding.

“If anyone has it, I hope they will bring it to the attention of the House.

The MP for Surrey Heath added: ‘As to any suggestion that someone might be the target of a lot of negative press for voting against the government, as a solid person, 100 per cent, totally behind the Prime Minister and yet also on receiving the end of a plethora of negative press articles, I can tell the honorable member that there is no correlation between the two.”

The comments come after Mr Wragg, who called on Mr Johnson to resign as Tory leader, claimed Tory rebels had been subjected to ‘pressure and intimidation’ by the government.

The MP for Bury South even alleged he was told he would jeopardize the establishment of a school in an area of ​​his constituency if he rebelled against a previous bill.

Mr Wakeford said: ‘This is a town that hasn’t had a high school in almost 10 years and how would you feel if you held down town regeneration for a vote?

Downing Street rejected the allegations and said: “We are not aware of any evidence to support what are clearly serious allegations.

“If there is evidence to support these claims, we will examine it very carefully.”

Mr Johnson added: “I see no evidence, have heard no evidence to support these allegations.

“And what I’m focusing on is what we’re doing to address the UK people’s number one priority, which is through Covid.”

The Prime Minister went on to defend the UK’s vaccination program and stressed that Britain is now the most open economy and society in Europe.

Other Tory MPs, including those who have rebelled against the government in the past, have also disputed allegations of blackmail by the whips.

Thanet South MP Craig Mackinlay posted on social media to confirm that his £19.8million leveling fund bid had been successful despite the former UKIP treasurer being ” particularly rebellious over the past year”.

Anthony Mangnall, who represents voters in Totnes and South Devon, responded to Mr Wakeford’s claims by tweeting: ‘Didn’t he get £20m from the Leveling Up Fund after voting against the government many times?

DO NOT MISS :
Brexit LIVE: ‘EU waffle’ on Ukraine silences doubters in US [LIVE]
Anneliese Dodds skewered as racist line is lit against Labor MP [REVEALED]
Six leadership hopefuls team up to stab ‘disaster’ Liz Truss in the back [INSIGHT]

However, Mr Wakeford said in his defection letter: ‘I care passionately about the people of Bury South and have concluded that the policies of the Conservative government under Boris Johnson do nothing to help the people of the constituency and do not actually make the struggles they face on a daily basis worse.”

Workington MP Mark Jenkinson also posted on social media to set out his thoughts on the allegations made against the whips.

He said: ‘I haven’t been the most loyal of backbench MPs at times, and I’ve been through what the whips would consider the ‘bad lobby’ on several occasions, particularly on restrictions of Covid.

“I never hid my intention to do so from the whips, and so I had many ‘conversations’ – often tense, sometimes rude! (on my part).

“I can categorically say that none of these conversations ever involved any threats, implicit or explicit, to me or my constituency regarding funding, publishing stories or anything of the sort.”