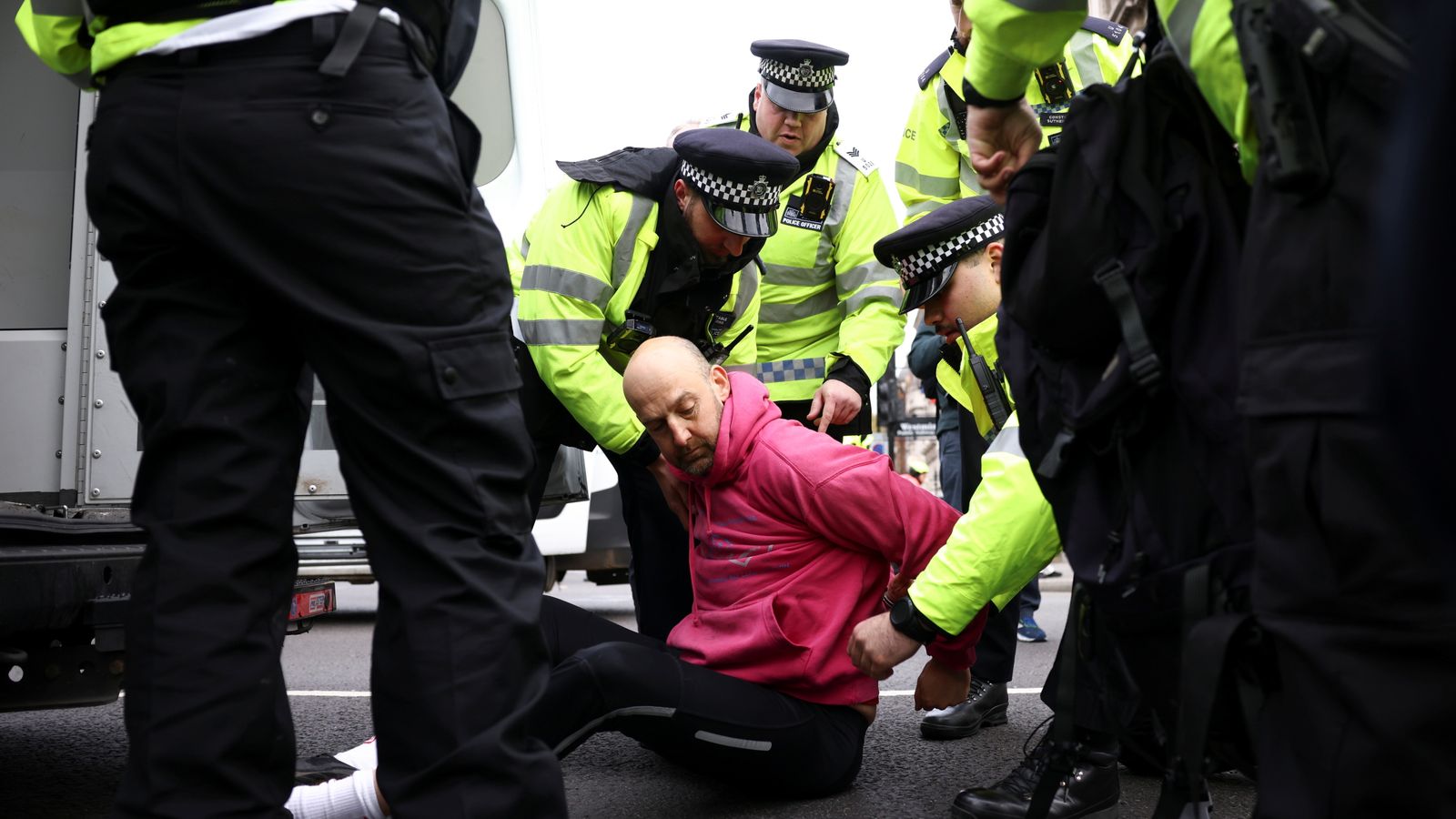 The government’s attempt to introduce laws to contain the protests received a major blow after the House of Lords rejected a number of controversial proposals.

The government had been pushed to act after disruptions caused by eco-activists such as Isolate Brittany.

But the Lords rejected several of the proposed powers, including:

• Allowing police to stop and search anyone at a protest ‘without suspicion’ for items used to prevent a person’s movement, known as ‘lockdown’

• A proposal to make it an offense for a person to interfere with the operation of key national infrastructure, including airports and newspaper printers

In a separate defeat, peers backed restricting harsher penalties for blocking a freeway to major roads and freeways rather than all roads.

Downing Street said it was “disappointed” that its peers rejected measures aimed at tackling the “guerrilla tactics” adopted by protesters.

‘We will reflect on last night’s votes before the bill returns to the Commons,’ the prime minister’s spokesman told reporters on Tuesday.

Why were the laws rejected?

Peers criticized the measures and their introduction at such a late stage of the bill’s passage.

Labor leader Lord Rosser said the ‘broad, significant and even more controversial powers’ had not been considered by the Commons, describing it as an ‘outrageous way to legislate’.

He said: ‘We cannot support any of these last-minute, rushed and ill-thought-out sweeping powers…except for approving increased penalties for willfully obstructing highways and major roads.’

Green Party counterpart Baroness Jones de Moulsecoomb said: ‘These are draconian laws which are a wider attack on our democracy.

The independent and prominent interbank QC Lord Carlile of Berriew, who was previously an independent reviewer of terrorism legislation, said: ‘The dilution of the powers of stop and search without suspicion is a threatening and dangerous step.’

Learn more about this:
Thousands of activists descended on London with a common goal
Blocking M25 amid Insulate Britain protests ‘legitimate’ and ‘reasonable’

But Home Secretary Baroness Williams of Trafford said: “The rights to free speech and assembly are the cornerstone of our democracy, and this government will not hesitate to uphold them.

“But a responsible government that upholds the rule of law must also uphold the rights and freedoms of the law-abiding majority.

“Their rights cannot and should not be trampled on by a small minority of protesters, who believe they should not be answerable to the law and should be given carte blanche to cause disruption at any cost.”

Liberal Democrat Lord Paddick, who was Deputy Deputy Commissioner of the Metropolitan Police, said: “If the government is determined to bring in these draconian, undemocratic laws, reminiscent of the Eastern Bloc police states of the Cold War, they should withdraw them now and introduce them as a separate bill to give the democratically elected House time to properly consider them.”

He added: “The anti-protest measures in the original bill were appalling. These measures and the way they were introduced are outrageous.”

In response, Lady Williams said: “The arguments being made here tonight are about the middle classes trying to keep working people out of work, and I know where I stand.”