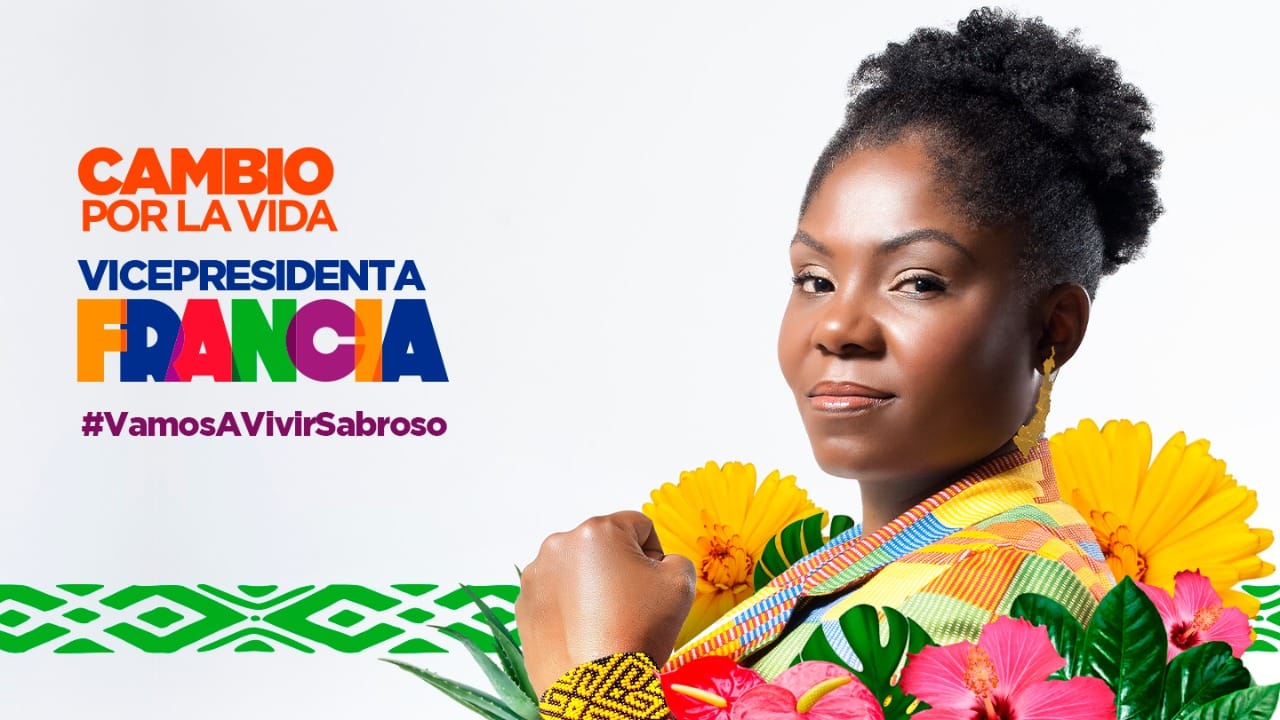 “Go Colombia! From resistance to power until dignity becomes customary! were the last words of Francia Márquez Mina in his first public speech after hearing the results of the March 13 presidential primary elections. Although she is not the first black woman to run for the Colombian presidency, that day Márquez, an award-winning grassroots leader from Suárez, Cauca, made history.

Out of 15 pre-candidates for the Colombian presidency, Márquez came third. With a campaign executed in record time, she achieved the third highest turnout—783,160 votes– more numerous than former governors, mayors and senators with longer political trajectories in Colombia. Márquez’s successful campaign made her a serious candidate to become Colombia’s first black vice-president. On March 23, Gustavo Petro, winner of the primary elections and left-wing candidate for the Colombian presidency, chose Márquez as his running mate.

Márquez is a 40-year-old black woman, environmental leader and lawyer whose rapid rise is expanding a new black feminist political perspective in Colombia and Latin America. As a political figure, she is often presented by the media as a “body irrelevant.“The emphasis on her identity as a black woman and her socio-economic background positions her as an exception among traditional political figures in Colombia. Márquez mobilizes a radical political project whose anti-racist, anti-commodification of nature and anti-patriarchal stance goes against and outside the masculinity and whiteness rooted in the colonization of Colombian political institutions. In particular, it calls into question the uninterrupted history of conservative and security male politics, now notably embodied by the candidate Federico Gutierrez. In contrast, Márquez introduced vital discussions about building a national agenda that takes economic, environmental, and socio-racial justice seriously.

As a black woman, who previously worked as artisanal miner and domestic worker, Márquez insisted on including the excluded structurally. His campaign explicitly appealed to “Los Nadies(the Nobodies): women, indigenous peoples, people of African descent, campesinos, LGBTIQ+, andthe generation of the aguante,» disadvantaged youth whose lack of opportunity has been exacerbated by the pandemic. Through his political movement “Soy por Somos” (I am because we are), Márquez outlined a policy that taps into the African philosophy of Ubuntu. She weaves together intersectional anti-racist feminism and Indigenous and Afro-Colombian epistemologies of “care for life and territory” to address environmental racism that affects racialized ancestral territories where impoverished populations often live.

Marquez’s call for change builds on the turmoil that has erupted in Colombia over the past year. Between April and June 2021, a national uprising occurred, led by Colombian youth and various popular movements. The protests were sparked by a tax reform bill that proposed to raise taxes on everyday items during the pandemic. Demonstrations are violently repressed by the state, particularly in Cali, the epicenter of the uprising.

“People want change, in terms of justice, equity and to eradicate the logics and structures of coloniality, racism, patriarchy,” Márquez said during a maintenance in 2021. The protests, she added, are not a just response to recent events but to the country’s systemic inequality. “And this youth-led social upheaval in 2021 – which I also participated in – is also an example of this historical exhaustion.” The unpopular government of President Ivan Duque was eventually forced to negotiate with various grassroots players to stop last year’s uprising, which allowed Marquez to rise to power as a political alternative.

From Grassroots to Politics

MArquez’s unprecedented popularity is the result of his political project which embodies his praxis. Márquez was born in Yolombó, a city in corregimiento (district) of La Toma, Cauca, an area with an ancestral population of African descent. The Cauca is a region where racial divisions are well entrenched. Its capital, Popayán, known as white city for its white-painted colonial architecture, is politically dominated by men and by former white colonial families who support a racially divided Cauca. It has the highest rate of murders of social leaders in Colombia and is undoubtedly the most dangerous place to lead the defense of social, political, environmental and human rights in the country.

Since 2004, the Colombian government has granted gold mining licenses for the region to multinational mining companies without consulting the population. Their actions displaced more than 5,000 residents and poisoned the city’s only water source, the Ovejas River, with mercury. In addition, countless poor women of African descent in La Toma have been sexually abused by multinational workers, illegal miners, paramilitaries and state military.

Multinational mining has disrupted the community practice of small-scale artisanal mining to support their families. Government concessions have also encouraged multinational corporations, in collaboration with paramilitary groups, to violently seize large swathes of La Toma land, through threats, forced evictions and massacres for large-scale gold mining between 2004 and 2014.

In response, Márquez organized and led the 2014 Turbante Market during which, over a period of 10 days, 80 women wearing headscarves traveled the 350 miles from La Toma to the headquarters of the Ministry of the Interior in Bogotá. Márquez, alongside about twenty women from La Marcha then occupied the ministry inside for five days. Their protest forced the Colombian government to halt mining activities in the area.

Márquez’s activism made him a target for assassination. In 2015, death threats from paramilitary groups forced her to leave La Toma in 2019. During a community meeting in 2019 in Santander de Quilichao, Cauca, she was nearly killed when the meeting house was attacked with gunshots and grenades.

For his leadership in La Toma, Márquez received the 2018 Goldman Environmental Award, and his activism has garnered national and international attention. The fight against multinational corporations, paramilitaries and illegal miners in La Toma propelled Márquez’s involvement into the formal political arena, expanding an environmental and political movement rooted in black feminist theory and practice.

Márquez maintains a powerfully organized political image. Most of her outfits are made of shiny Afrocentric prints that pay homage to the Colombian Pacific coast and kente fabric, a Ghanaian fabric signaling the politics of the African diaspora. Additionally, she frequently wears her Afro-textured hair in natural styles, a statement in a national context where black women oscillate between embracing their natural hair and fighting gender pressures, anti black messages to straighten it.

“I learned to identify proudly as a black woman, to recognize my hair, my blackness,” Márquez said, adding that “this country made us feel ashamed of blackness and made us feel alone. responsible for the conditions in which we live.” Her image challenges the Eurocentric aesthetic norms that black women are forced to adopt to enter politics.

Márquez’s message emphasizing “living in peace and without fear” is particularly aimed at impoverished communities affected by the Colombian conflict. She has criticized the limited impact of the 2016 peace accords and the structural racism embedded in the anti-poor necropolitics of the Colombian state and has long worked for grassroots change. Márquez follows and builds on the footsteps of poor, black, anti-racist and environmental activists who have tried to position themselves in the political sphere. His agenda involves environmental justice and the defense of ancestral lands, food sovereignty, the legalization of ancestral but criminalized illicit crops such as cannabis and coca, the decriminalization of abortion, gender equality and the intersectional struggle against patriarchy.

MArquez’s presence in Colombian politics exposes the challenges faced by black women seeking political participation. On July 21, 2021, Márquez’s Soy por Somos movement allied with the Historical Pact, a coalition of center and left parties. Despite his alliance with the leftist Historical Pact, Márquez often receives racist abuse online supporters, leaders, and opponents of the historic Pact. Especially, elite white women in Colombia have made their voices heard trying to keep Márquez “in his place”. She is often criticized as having no political experience, despite more than 27 years of grassroots activism and leadership experience in the Proceso de Comunidades. Negras (black communities process).

Márquez has also had to navigate the media marginalization of her political campaign from the start, exposing the systemic misogyny, classism and racism that keep black women out of politics. Until January 2022, polls, media and TV debates paid little attention to his campaign, excluding him from TV debates. However, social media helped spread her black feminist message to young and disadvantaged voters. When featured, the media often portrayed Márquez as a political underdog.

In the primaries, Márquez finished second to historic Pact leftist Gustavo Petro. Most of its votes were geographically located in Bogotá and Antioquia. She received support from Antioquia-based Estamos Listas (We Are Ready), Colombia’s first feminist political party. feminist alliances with Estamos Listas, as well as other feminist movements like Artemisa and Mujeres Diversas, contributed to votes won by Márquez in the primaries.

Now, after years of struggles on the ground, Márquez’s revolutionary political stance is finally visible. While there is no guarantee that Márquez will become Colombia’s first black female vice president in May, her work so far has already paved the way for future black feminist female politicians and created new space for people who have historically been excluded from the highest political institutions in Colombia.

Nadia Mosquera Muriel is a provost postdoctoral fellow in the Department of Geography and the Environment and the Center for Women and Gender Studies (CWGS) at the University of Texas at Austin, as well as a member of the Centro de Estudios Afrodescendientes (CEA) at the Pontificia Universidad Javeriana in Bogotá.

What is likely to be in the “Energy Security Strategy”? | Political news