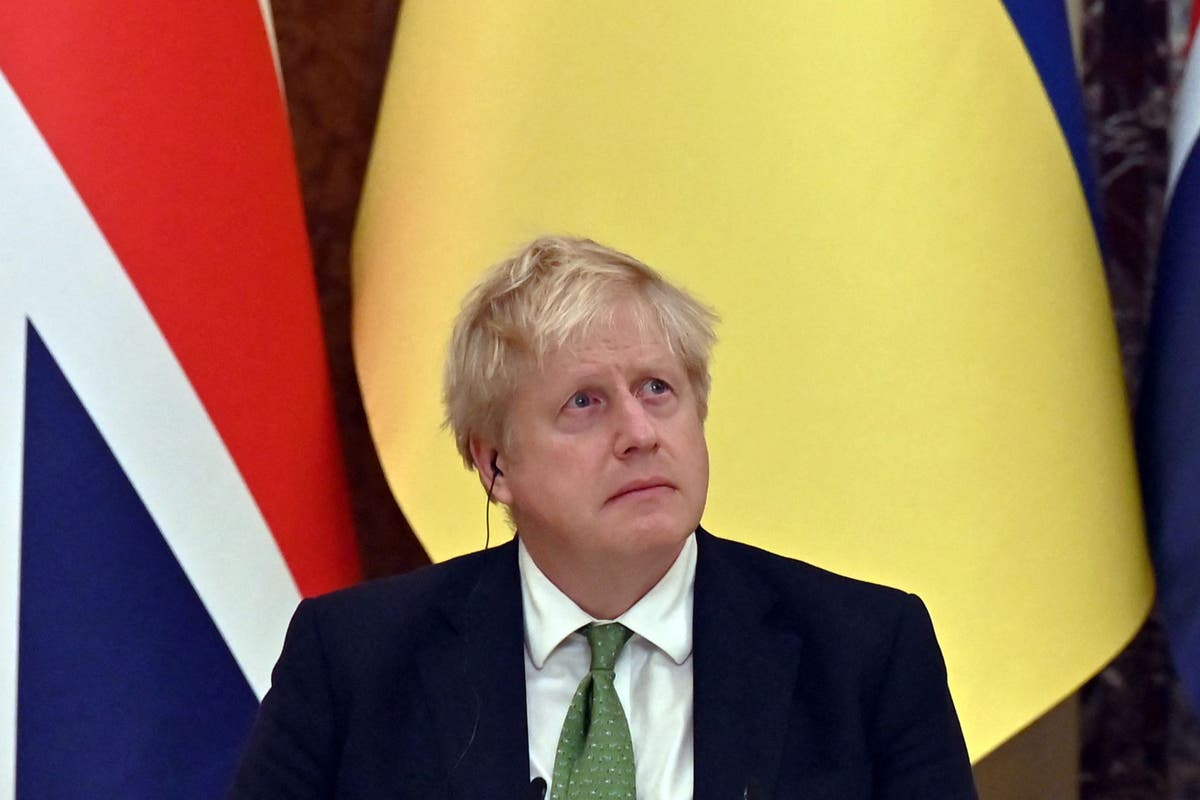 Former Conservative MP Tobias Ellwood has called on Boris Johnson to step down and announced he will submit a letter of no confidence to his leadership.

Mr Ellwood, chairman of the defense select committee, said it was ‘time to fix’ the party’s problem and admitted the scandal was dragging the Tory party into a ‘ugly place’.

He told Sky News he wanted to break the ‘holding pattern’ the party currently finds itself in, saying it was ‘awful for all MPs to have to defend this to the British public’.

It came as Boris Johnson refused to confirm whether he would step down if fined by police for breaking Covid rules.

The Prime Minister told The Sun he would reveal whether he had received a fixed sanction notice – but declined to say whether he would tender his resignation as a result.

Elsewhere, Mr Johnson is facing fresh claims he attended a going away party at No 10 for a special adviser on January 14, 2021 at the height of the third lockdown. He reportedly gave a short speech at the event and stayed for five minutes, the Guardian reported.

Project upgrade “not aware of the intricacies”

He told BBC Radio 4’s Today programme: ‘You have to welcome the fact that the government is talking about upgrading but seeing it as a national project without being aware of the complexities and differences between different places, c is getting that’s all wrong.

“The key to taking it to the next level is being aware of the particular issues that individual locations face.”

He cited transport problems in his home town of Wakefield, which he said stem not from a lack of connectivity with other towns, but from travel problems in the West Yorkshire district, cutting people off from places offering job opportunities.

Professor Menon urged the government to ‘give local leaders both the authority and the finances to enable them to do some of these things because they are invested in their areas and know what is best for them’ .

Energy regulator Ofgem will announce on Thursday how much the bills of around 22 million households may rise from early April.

The authority said it would reveal the new energy price cap at 11 a.m.

Millions of people currently have their energy bills capped at £1,277 for an average household. Experts believe this could rise to around £1,900 from April 1, when the new price cap comes into effect.

Calls have intensified in recent weeks for the government to step in to help struggling households.

Gove: ‘I have a deep reservoir of affection for Dominic Cummings’

Upgrade Secretary Michael Gove said he had a “deep reservoir of affection” for Dominic Cummings.

The former chief aide to the Prime Minister has made a series of damaging statements to Boris Johnson since leaving Downing Street in November 2020.

Mr Gove told BBC Radio 4’s Today programme: ‘I have enjoyed working with him and have a deep reservoir of affection for him.

“But I think the criticisms he’s made of the Prime Minister recently are wrong, and I think it’s completely understandable that those who watch political dramas may… you know, will want to follow the twists and turns of this story. .

“But I think my job is to focus on delivering the details that we discussed in the Leveling Up whitepaper, and that’s what I’m focusing on.”

Mr Ellwood continued: ‘The government has recognized the need for fundamental change, in the culture, in the composition, in the discipline, in the tone of Number 10, but the strategy has apparently been to survival, of hasty political announcements like the navy taking over the Channel crossings of migrants.

“And attacking Keir Starmer this week with Jimmy Savile…I mean who advised the Prime Minister to say that?

We are better than that, we must seek to improve our standards and rise above where we are today.

He added: ‘I don’t think the Prime Minister realizes how worried his colleagues are across all corners of the party, backbench MPs and ministers alike, that this is all only going one way and will invariably slide towards a very ugly place.”

The chairman of the select and defense committee has told Sky News he will submit a letter of no confidence to the Prime Minister as it is ‘time to resolve’ the partygate scandal.

Mr Ellwood warned the Conservative Party was ‘sliding into a very ugly place’ under Mr Johnson.

When asked if the Prime Minister should apologize, he told BBC Breakfast: “No”.

Earlier he told Sky News: “I think this is a particularly sensitive issue and needs to be handled with care, and I listen with immense respect to those who act for the victims of the actions of a terrible, terrible criminal.

“But – and this is not a subject I want to dwell on as it is particularly sensitive – it is true that the CPS have apologized for their handling of this matter and what happened in 2009 , and I think we should acknowledge that an apology was given at the time and respect that.

He added: “Keir Starmer acknowledged that mistakes had been made by the organization he led, to his credit. He was very clear about those mistakes.

Tracy Brabin, the Labor mayor of West Yorkshire, said there were ‘plenty of reasons to be happy’ with Secretary Michael Gove’s plan for the UK, but said ‘the devil is going to be in details”.

She told the BBC’s Today programme: “It’s like a love letter to take it to the next level, isn’t it?

“A lot of ambition, a lot of hope, but unless you have the money and the resources you are going to struggle.”

She went on to say, “I think we were collateral damage, actually, between a fight between number 10 and number 11.

“Boris Johnson likes to put his finger on a map and say ‘let’s do this, I want a northern Crossrail’ and the Treasury saying ‘well you won’t get it’.

“So that’s the tension and it can’t be just Michael Gove. Every government department has to sign up for the upgrade program.

The cabinet minister has refused to be fired over new lockdown-breaking allegations by the Prime Minister, including claims he witnessed a departure for an adviser during the third national lockdown.

Pressed on the allegations, Mr Gove told BBC Breakfast: ‘There is a limit to what I can say as a Met Police investigation is ongoing.

Hello and welcome to the Evening Standard’s live political coverage.

It’s going to be another busy day in Westminster – here’s a quick rundown of the latest stories:

– The Prime Minister is coming under renewed pressure over lockdown parties in Downing Street, amid reports he has been attending more gatherings under investigation by police. Last night various reports linked Mr Johnson to three other parties held during the lockdown

– The government has revealed its ‘levelling up’ agenda, with a white paper published this morning setting out ’12 big missions’ to tackle regional inequalities across the UK. Leveling Secretary Michael Gove said people in the North and Midlands had been “neglected and undervalued” and that the policies – which cover a range of areas from education to transport – would help correct the imbalance in the country.

– The row over Boris Johnson’s Jimmy Savile insults directed at Sir Keir Starmer earlier this week continues, with the Prime Minister telling The Sun he stood by his comment despite heavy criticism. Mr Gove said he had ‘nothing to apologize for’ after falsely suggesting the Labor leader had not prosecuted Savile during his tenure as Director of Public Prosecutions (DPP)

– Boris Johnson has warned Vladimir Putin that a Russian invasion of Ukraine would be a political, humanitarian and military “disaster”. During a visit to Ukraine yesterday, he urged Russia to ‘step back’ amid fears an invasion was imminent.