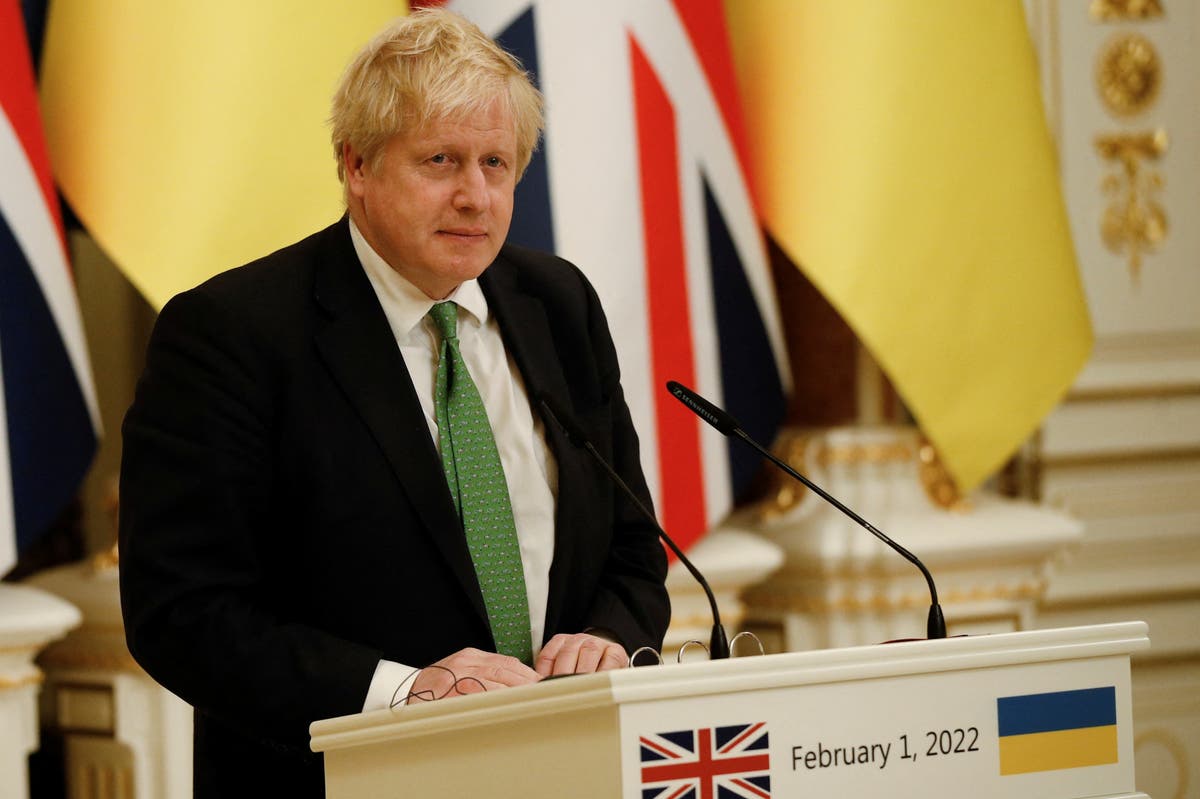 Oris Johnson warned on Tuesday that a Russian invasion of Ukraine would spell military and humanitarian disaster.

“A new Russian invasion of Ukraine would be a political disaster, a humanitarian disaster, and in my opinion it would also be a military disaster for Russia and the world,” the prime minister said at a press conference during the meeting. a visit to Kyiv.

Johnson and Ukrainian President Volodymyr Zelensky gave a press conference after meeting for talks as the leaders continue to seek a diplomatic avenue to prevent a Russian invasion of Ukraine amid their troop buildup in the Ukrainian border.

A joint statement released after the talks said the UK stood “neck to neck with Ukraine in the face of ongoing Russian aggression”. The prime minister said the buildup of Russian troops on the Ukrainian border was perhaps the greatest act of hostility “towards Ukraine in our lifetime”.

Meanwhile, another Tory MP called on Mr Johnson to resign over the partygate scandal and submitted a letter of no confidence to his leadership.

Peter Aldous, the MP for Waveney, said he had ‘never taken such a step before’ but had been placed in an ‘odious position’ by repeated allegations of law breaking by the Premier minister and Downing Street staff during lockdown.

Mr Aldous said he had given the letter to the chairman of the 1922 committee, Sir Graham Brady. A vote of no confidence in Mr Johnson’s premiership will be called if 54 letters are submitted.

The news follows the release of a summary of Sue Gray’s report into rallies held during lockdown at No 10, with the senior civil servant accusing Downing Street officials of a ‘failure of leadership’.

Downing Street was forced to do a U-turn on Monday after hints the report might not be published in full, sparking anger among Tory backbenchers.

“It will be a European war”, says Zelensky

Ukrainian Volodymyr Zelensky has declared that any occupation of Ukraine would constitute a “European war”.

He said at the press conference in Kyiv: “The occupation of a territory city will not take place. Unfortunately, there will be a tragedy in the event of a powerful escalation against our state.

“And so I’m very open. It will not be a war between Ukraine and Russia.

“This is going to be a European war. A full-fledged war.

Zelensky: ‘Anyone who tries to occupy Ukraine will be at high risk’

Ukrainian Volodymyr Zelensky issued a stern warning that there will be “high risks” for anyone trying to occupy Ukraine.

He said the Eastern European country had been “preparing for bad things” while answering questions at a press briefing in Kyiv.

“There will be high risks for anyone who tries to occupy even a part of our territory. Very high risks.

He also added that the Ukrainians will fight “until the very end”.

“The Russians should hear us. They should listen and understand that war is something no one really needs. But at the same time, we didn’t invite anyone to come visit us with weapons in their hands.

Boris Johnson asked about the partygate scandal at a press conference

The Prime Minister was asked about his ability to give full attention to the situation in Ukraine while juggling the “partygate” scandal at home.

But he refuted suggestions that he wouldn’t be able to handle both.

Mr Johnson said: “Let me start and just say that I am fully focused on delivering the priorities of the British people and that includes ensuring we are secure in our dealings with our friends and allies.

“Our country is very concerned about what we see on the Ukrainian border.”

He added that the international community should try to “make it clear” to the Russians that Ukraine “will fight”, and that there are 200,000 people who will put up “very very fierce and bloody resistance”.

“I really hope that President Putin will step away from the path of conflict and that we will engage in dialogue and that is what the UK intends to produce and that is why I am here today “, did he declare.

The Prime Minister also said he would publish “everything we can” once investigations into the alleged breach of coronavirus rules in No 10 have been finalised.

Asked at a press conference in Kyiv, Ukraine, if he would commit to releasing the full Sue Gray investigation, including the 300 handed over images included as part of the investigation, he said. “Yes, of course, we will publish everything we can as soon as the process is complete, as I said yesterday.

Joint statement says UK is ‘neck to neck’ with Ukraine

A joint statement released following Boris Johnson’s meeting with Ukrainian President Volodymyr Zelensky described how the UK stands “neck to neck with Ukraine in the face of ongoing Russian aggression”.

The statement, issued by the offices of the Prime Minister and the President, said: “The Prime Minister underlined the United Kingdom’s unwavering commitment to Ukraine’s sovereignty, independence and territorial integrity at the within its internationally recognized borders.

“The UK stands with Ukraine in the face of ongoing Russian aggression, which threatens regional peace and security and undermines the global order. Both leaders stressed that it is the right of every Ukrainian to determine their own future.

“Leaders warned that any further Russian incursion into Ukraine would be a massive strategic mistake and would come at a huge humanitarian cost.”

He said Ukraine and the UK would “work together to strengthen Ukraine’s security and ability to defend itself”.

He said: “We have to face a grim reality, which is that while we are here, Volodymyr, today more than 100,000 Russian troops are gathering at your border in perhaps the biggest demonstration ever. hostility towards Ukraine of our life.

“And the potential deployment dwarfs the 30,000 troops Russia sent to invade Crimea in 2014.

“Since that time, of course, everyone knows that 13,000 Ukrainians have been killed and that Ukraine is plunged into a decade of war.

“It goes without saying that a new Russian invasion of Ukraine would be a political disaster, a humanitarian disaster, in my opinion it would also be for Russia, for the world, a military disaster as well.

“And the potential invasion runs completely counter to President (Vladimir) Putin’s claim to act in the interests of the Ukrainian people.”

The Johnson-Zelensky press conference has begun

It comes after talks at the Mariinskyi Palace on Tuesday afternoon.

President Zelensky opened the conference by welcoming the Prime Minister to the country for his first visit, and acknowledged that it is taking place in “difficult times”.

He said Mr Johnson had assured him of his support for Ukraine’s sovereignty.

“This is confirmed by a recent decision by the British government which provides for sanctions in the event of aggression against Ukraine,” he continued.

“We are grateful to Britain for their support.”

Boris Johnson and Ukrainian President Volodymyr Zelensky are due to hold a press conference soon to discuss tensions with Russia.

A senior Tory in London has called on Boris Johnson to resign after the publication of Sue Gray’s report, writes Bill McLoughlin.

Following Ms Gray’s damning report of the numerous rallies held at No 10 and across Whitehall, London Assembly Member Andrew Boff said it was time the Prime Minister resigned from his position as chief.

He said the ongoing police investigation into the rallies could have serious consequences in the upcoming local elections in May.

Speaking to MyLondon, he said: “He’s a great seller in this country, with a proud track record behind him.

“Now is the time for him to hand over to someone else.”

Another Tory MP calls on Johnson to resign

Another Tory MP has called on Boris Johnson to resign over the partygate scandal.

MP Peter Aldous admitted writing to the chairman of the 1922 committee, Sir Graham Brady, to express that he had no confidence in Mr Johnson’s leadership.

He tweeted: “After much soul-searching, I have come to the conclusion that the Prime Minister should resign.

‘It is clear that he has no intention of doing so and so I have written to the Chairman of the 1922 Committee of Conservative Backbenchers, advising him that I have no confidence in the Prime Minister as leader of the Conservative Party.

“I have never taken such a step before and had hoped that I would not be placed in such an odious position.

“While I realize others will disagree with me, I believe it is in the best interests of the country, the government and the Conservative Party.”

The Prime Minister is expected to hold a press conference alongside his Ukrainian counterpart Volodymyr Zelensky later in the afternoon.

On an icy airfield, Ukraine rolled out the red carpet for the arrival of the Prime Minister as he was greeted with a military ceremony in temperatures approaching 0°C.