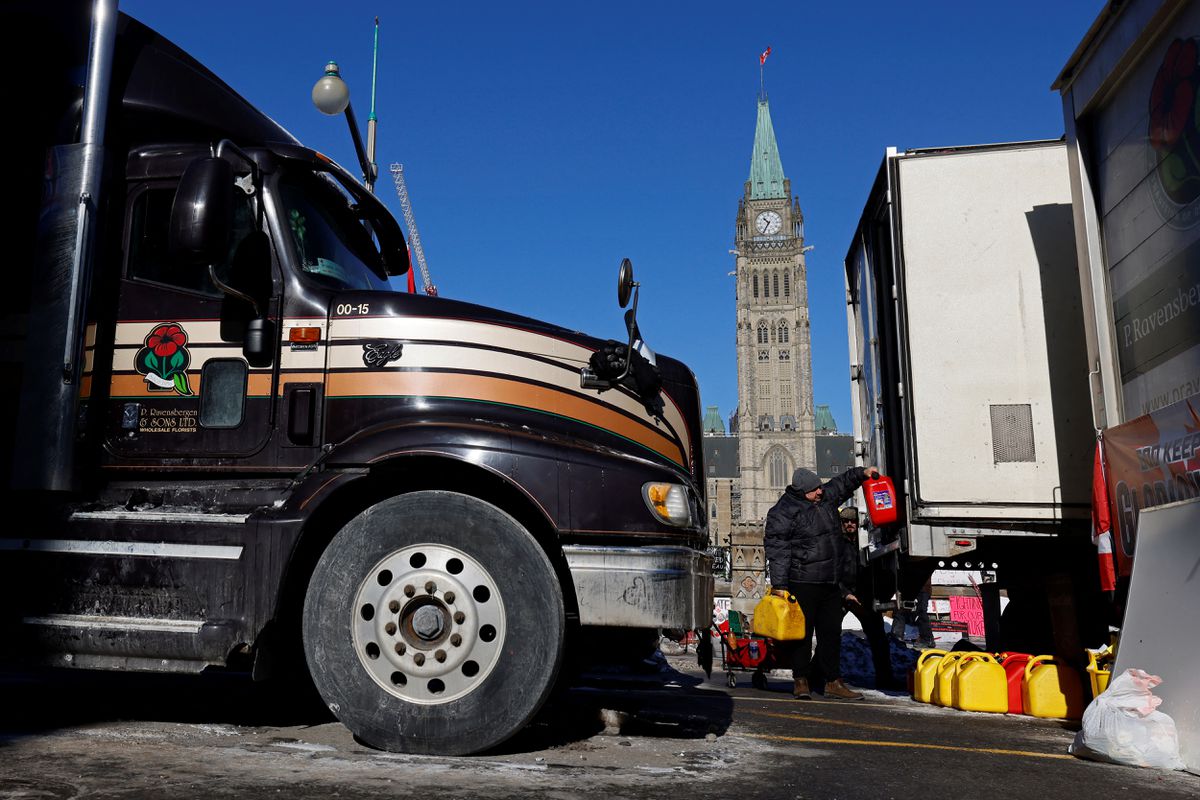 Policy briefing: Trudeau consults with provinces on use of Emergencies Act to end border blockades

Prime Minister Justin Trudeau is consulting with Canada’s premiers on the triggering of the Emergencies Act as the federal government tries to chart a course to rein in the lockdowns blocking border crossings and the capital.

The Emergencies Act gives the federal government sweeping powers when invoked. But before it can be triggered, the government is required to consult with the provinces and territories.

A provincial source said the Prime Minister reiterated to Premiers that Ottawa was not considering calling in the Canadian military, but was prepared to use its power under the Measures Act. urgency to target certain types of activity, such as banning protests at border bridges, trade routes and city centers.

Other federal measures include giving the RCMP and other authorities the legal right to secure protected locations, imposing heavy fines and jail time, and allowing them to provide essential services, which would allow the towing of the trucks used in the demonstrations.

The federal cabinet has yet to decide whether to trigger unused Emergencies Act powers, but was required to consult with the provinces as required by law. The provincial source said the provinces expect the federal government to act fairly quickly. The Globe does not identify the source who was not authorized to discuss the matter.

This is Politics Briefing’s daily newsletter, written by Ian Bailey. It is available exclusively to our digital subscribers. If you’re reading this on the web, subscribers may subscribe to the Policy newsletter and over 20 more on our newsletter sign-up page. Do you have any comments? Tell us what you think.

NEWS OF THE DAY

JUDGE GRANTS INJUNCTION AGAINST NOISE, IDENTIFICATION VEHICLES AND FIREWORKS – An Ontario judge has granted an injunction to enforce noise and idling regulations in Ottawa. The protest by anti-government protesters blocking city streets around Parliament Hill is now in its third week. History here. Meanwhile, Ottawa’s mayor’s office said on Sunday it had reached an agreement with protest organizers to move the trucks that clogged traffic and residential neighborhoods in the capital’s downtown core for the third weekend in order to protest COVID-19 public health measures. History here.

DONOR DATA SAID TO BE LEAKED – A leaked site says it received tons of donor data from Canada’s anti-vaccine mandate truckers after the fundraising platform popular with supporters of the movement allegedly suffered a piracy. History here.

GLOBE AND MAIL EXPLAINER – Windsor’s Ambassador Bridge is open. The Ottawa protests are in their third week. Where are the truck convoys now? The Globe and Mail explainer is here.

BIG CHANGES COMING TO ONTARIO’S COVID RULES – Ontario plans to lift its vaccination certificate system on March 1, Premier Doug Ford announced Monday, while allowing the removal of current capacity limits for restaurants by Thursday. Masking rules must remain in place. Businesses will be free to continue using the province’s proof of vaccination system if they wish. History here.

PREPARATIONS FOR WAR IN UKRAINE – Foreign correspondent Nathan VanderKlippe reports from Lviv, Ukraine, as Canadian troops withdraw from the country and the few remaining diplomats move from Kiev to this cultural hub in the west of the country, where local workers spent their Sunday stocking on bullets – and worshipers consulted their priest whether it was better to flee or fight. History here.

The agenda projected in the House of Commons on February 14 is here.

THE INCIDENT RESPONSE GROUP – The Prime Minister has spent a lot of time lately in meetings with the Incident Response Group, a cabinet committee which, according to a December 3 statement here of the Prime Minister’s Office, serves as a “dedicated emergency committee in the event of a national crisis or during incidents elsewhere that have major implications for Canada”. According to the same notice, the members of the group may consist of relevant ministers and senior government officials, as needed, depending on the nature of the incident. The Globe and Mail has contacted the Prime Minister’s Office to find out who is on the current iteration of the committee.

COMMONS VOTE ON FEDERAL MANDATES – Monday’s agenda includes a Commons vote on an Official Opposition motion, sponsored by Interim Conservative Leader Candice Bergen, that the House call on the government to table a plan to lift all federal mandates and restrictions and file the plan by Feb. 28.

In the Valentine’s Monday edition of The Globe and Mail podcast, Yader Guzman , a freelance photographer based in Bogota, Colombia, talks about the journey of the red roses we buy in Canada from Colombia – the second largest flower exporter in the world – where they are grown. He tells how they went from greenhouses in Bogota to local stores in Canada and how it became such a huge industry for Colombia. The decibel is there.

NDP Leader Jagmeet Singh held a press briefing on health care and hosted a roundtable, closed to media, with University of Ottawa students to hear about the impact the protest of the trucking convoy has had on their daily lives.

No published schedule for other party leaders.

DATA DIVING WITH NIK NANOS – Canadians are losing faith in the country’s most vital institutions. The Ottawa protests are just part of the national malaise that has led some to question national institutions like Parliament, the prime minister and the governor general. The dive starts here.

THREE IN FOUR CANADIANS TELL CONVOY PROTESTERS TO GO HOME – Research from the Angus Reid Institute suggests that more than two in five Canadians now say the protests have made them more likely to support continued restrictions on wearing masks indoors (44%) and vaccination requirements for crossing the Canada-US border (44%) . Almost three-quarters of Canadians (72%) say the time has come for protesters to “go home, they have made their case”. Details here.

Kelly Cryderman (The Globe and Mail) on the confidence of the Premier of Alberta that he did the right thing amid good reason for skepticism: “Jason Kenney acknowledges that he has ‘thought’ about the optics of announcing a relaxation of pandemic health measures in Alberta, and whether that would be like kowtowing to the Coutts protesters who want all COVID-19 mandates be dropped immediately. But he insists, as he did earlier this week, that the decision has nothing to do with truckers blocking the border. “It’s not about bending to extreme,” the premier said in an interview with The Globe and Mail, responding to criticism from the province’s NDP and others.

Andrew Steele (Globe and Mail contributor) on conservatives who abandon their leaders too quickly: “The leaders of the Conservative Party are like Kleenex: used once and thrown away. Since Confederation, the average Liberal has led the party for more than 11 years, or nine years with interim leaders. NDP/CCF leaders have served an average of almost eight years. But the average tenure of Conservative, Progressive Conservative, Reform or Canadian Alliance leadership lasted only 6.3 years, and only five years if interim leaders are included. This means that the average Liberal has led their party to three elections, the average New Democrat two, but a Conservative only one”.