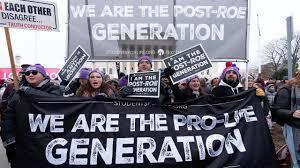 There is one fact that obliterates the reasoning behind the pro-life position. Banning legal abortion does not stop abortions. He simply pushes them into the shadows. And let women have abortions outside the safety barriers of professional medicine. Not all women bother you. Just the poor, who are often minorities.

Women who have money will become abortion tourists. They will travel from states with Sharia to states that respect individual freedom. This will in turn give an economic boost to these welcoming states. These wealthy women will certainly be inconvenienced. But they won’t have to carry the millstone of a child begotten by a rapist or a family member, or a child they can’t afford to raise, safe from want and suffering. However, these women are not the usual recipients of abortion.

Anti-choice crusaders would like citizens to believe that abortion is a procedure adopted by flibbertigibbets to terminate a pregnancy resulting from a chance affair. This is a lie. There is about a 50% chance that a person who has had an abortion Lives Under the poverty line. And 59% of the time, a woman who has an abortion already has a child. The reason these women have abortions is that they cannot afford to have another child. And let us also note that 100% of abortions are performed when the pregnancy is not desired.

Pro-lifers will deny this and claim that women are routinely tricked into having abortions by the fetal sperm donor who does not want the expense and inconvenience of a child. I can’t say it never happens. But I haven’t heard of a massive protest by women who say they’ve been victims of this kind of coercion. Also, if this was a problem, a few questions added to the existing abortion screening protocol would allay this concern.

We can also reject claims of genocide by anti-choice activists. Black women get a disproportionate share of abortions. But they don’t get them because they’re black. They get them because they are poor. So if there was a “genocide”, it would be due to conservative policies that impoverish minorities, not abortion. And there is no genocide, black mothers have an average of 2.4 children. While white mothers have 2.2.

A silver lining to this dark, gloomy cloud of misogyny is that today, unlike the pre-Roe era, medical abortion is an option for many women. Abortion-banning states will do their best to prevent women from getting the drug. But it won’t work any better than states’ attempts to stop the use of other illegal drugs.

One strategy that these theocratic states are eager to deploy is taken from the playbook of the Stasi secret police of the godless former East Germany. They employed, in cash or under duress, thousands of snitches to spy on their neighbors and even their own family. Texas has already implemented this “dollars for dirt” strategy to get Texans to attack their fellow citizens. Other states will soon follow. It seems that tyranny makes strange bedfellows.

Pregnant women would also be well advised to use incognito mode on their computers if they are looking for information on medical abortion. I’m sure the anti-choice sadists will soon enact laws allowing computer searches of women suspected of exercising bodily autonomy.

There will still be times when the procedure will have to be surgical. And by closing the doors of clinics, poor women are risking their health and their lives to get abortions wherever they can. As 50% of abortions performed in the United States are surgical, this will put hundreds of thousands of women at risk of death or serious injury.

The solution to this is simple. Mandate comprehensive sex education with no opt-out. And make contraception free and easily accessible. The beauty of this is that the cost is low and the effects immediate. But nothing is guaranteed. Mistakes happen, and even with the best intention, conception can happen. In this case, make sure the pregnancy is wanted. Give pregnant women the means to pay for their child. Provide a financial and medical safety net, as they do in Scandinavian countries. And more women will carry to term.

But your pro-life crowd, in addition to being judgmental, is also parsimonious. They won’t spend any money. One because, while they demand that others live by their rules, they don’t want to pay for their imposed morality. Secondly because, while there are foot soldiers in the religious imperialist army who sincerely believe they are pro-life, their leaders are there only for power and sadism.

One of the keys to lifting people out of poverty is to give women reproductive autonomy. This is why family planning is an important step in pulling the third world out of its financial pit. First world countries understand that reproductive rights also allow women to have equal opportunities.

But America’s religious zealots are cut from the same cloth as the potentates of the Middle East with their medieval vision of gender roles, and tin dictators everywhere, who express their sadism without conscience through torture. In the case of dissidents, by electric shocks, pulling nails and beatings. And in the case of poor women, to forced motherhood.