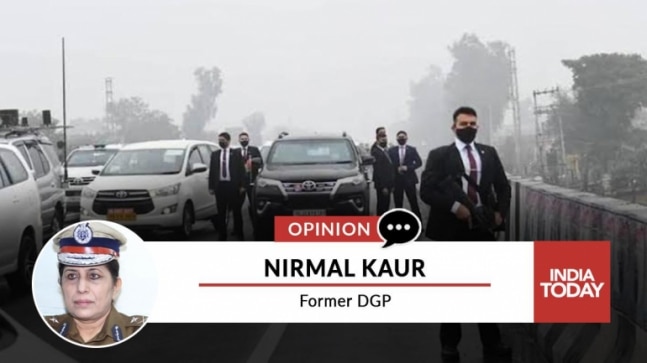 On January 5, television visuals showed the outstanding image of a stationary black SUV, easily identifiable among a motorcade of white cars, on a flyover a few miles from the heavily guarded Hussainiwala border. The SUV, a real sitting duck protected by only a handful of officers, carried the holder of the post of Prime Minister of India, one of the most important posts in the world.

The car could easily have been targeted by a well-positioned sniper or grenade launcher, or faced an attack from a drone, IED, or other similar readily available weapon.

The best way to understand the seriousness of the security breach that occurred during the overflight between Bathinda and Hussainiwala is to begin to imagine the chaos and confusion that would have followed an attack on the prime minister.

However, any security audit worth its salt should focus not on the outcome, but on the breakdown in the process itself. This is expressed most forcefully in Bruce Schneier’s aphorism that “security is not a product but a process”.

Such a process examines potential adverse events, the likelihood of their occurrence, potential impacts on the wider community and the nation, and ultimately establishes lessons and amendments to protocols for posterity.

This approach acknowledges the obvious reality that while outcomes are a matter of chance, security vulnerabilities can be assessed as more or less severe based on objective process-based criteria. The panel appointed by the Supreme Court to investigate the incident can be expected to follow such a course, and so it is a welcome development amid coverage that has been dominated by political recriminations.

Politically motivated statements challenge the common sense notion that the personal security of the head of government of the world’s largest democracy cannot be left to the vagaries of political considerations and the logic of dominant electoral alliances.

No view of the January 5 incident can lead to suggest that the Punjab Police complied with the rules and conventions that govern the issue of the Prime Minister’s security.

The pre-determined alternative route was not sufficiently protected by the Punjab police, which is clear from the undisputed fact that a large number of protesters succeeded in blocking the pre-determined route, and no serious attempt was made to expel these demonstrators.

The local forces present near the area concerned also do not appear to have notified the presence of the demonstrators to the SPG unit responsible for the Prime Minister’s “proximity” security, which would have at least enabled the Prime Minister’s convoy to stop in a relatively safe area.

It is well known that the overall responsibility for securing the Prime Minister during his visits to states rests with the respective state forces – a rule which has in fact been codified in the SPG’s “Blue Book” guidelines. The actions of the Punjab Police, regardless of the view of the incident, constitute a serious breach of their legal and professional duties.

It is enough to briefly note the arguments put forward by the intention of politicians to minimize the extent of the breach of security to realize their absurdity. That the Prime Minister returned to Delhi unscathed is, from a professional point of view, completely irrelevant.

READ ALSO | Prime Minister’s security failure: It’s all within the purview of the board of inquiry, says former Ferozepur SSP on India Today sting

It should be recalled that the assassin who killed ex-Prime Minister Rajiv Gandhi was in fact disguised as a partisan. The most dangerous response, however, comes from those who attempt to link the security failure to broader political developments.

The President of the Punjab Congress, for example, publicly claimed it as a reward for the “suffering” suffered by farmers on Delhi’s borders; one can at best hope that he ignores the potentially calamitous consequences of such a major breach of security.

It must be remembered that the history of Punjab is a history of bloodshed and violence. If, God forbid, something had happened to the Prime Minister, the nation could have been plunged into a frenzy of violence and carnage reminiscent of our not-so-distant history.

Insane reactions and comments borrowed from the world of comedy shows should surely not be allowed to dominate conversations about national security.

It would also be worth remembering that in 1984 the then Prime Minister, Indira Gandhi, was advised, on the basis of information provided by the intelligence services and in the context of the anger stirred up within the Sikh community by the divisional forces over Operation Blue Star, to remove Sikh police from its security contingent. She disagreed. She was shot in broad daylight by her own guard in her own home.

This led to widespread riots across the country in which goons and anti-social elements rallied under the Congress party banner in a tribal ritual of torturing, looting and murdering the easily identifiable Sikh community. More than three decades later, the psychological wounds left by the events of 1984 are still not healed.

On a personal note, before 1984 I remember hearing the best “Sardar” jokes from the Sikhs. After 1984, it is no longer possible to make such jokes without arousing a defensive attitude from fellow Sikhs. This is perhaps one of the least serious signs, but also one of the most real, of the sense of persecution felt by many Sikhs to this day. It is of some significance that the NSG was in fact formed in this context.

There have been many serious security breaches since that fateful incident, including the one that led to the assassination of Rajiv Gandhi in 1991, but never perhaps so brazenly politicized.

It should be remembered that the Prime Minister of India is not just a person, but an office and an institution: the most important constitutional office in the country.

Likewise, his security is not only a matter of his personal security but of the security of an institution which has a crucial bearing on national security and indeed on the life of every citizen.

As police officers, we are trained to appreciate the professionalism required to secure constitutional office holders. It would help if the whole country also understood the importance of emphasizing the value of professionalism rather than politics in these areas.

After all, no one knows better than the Indians the terrible consequences that can follow from a failure to obtain the Prime Minister.