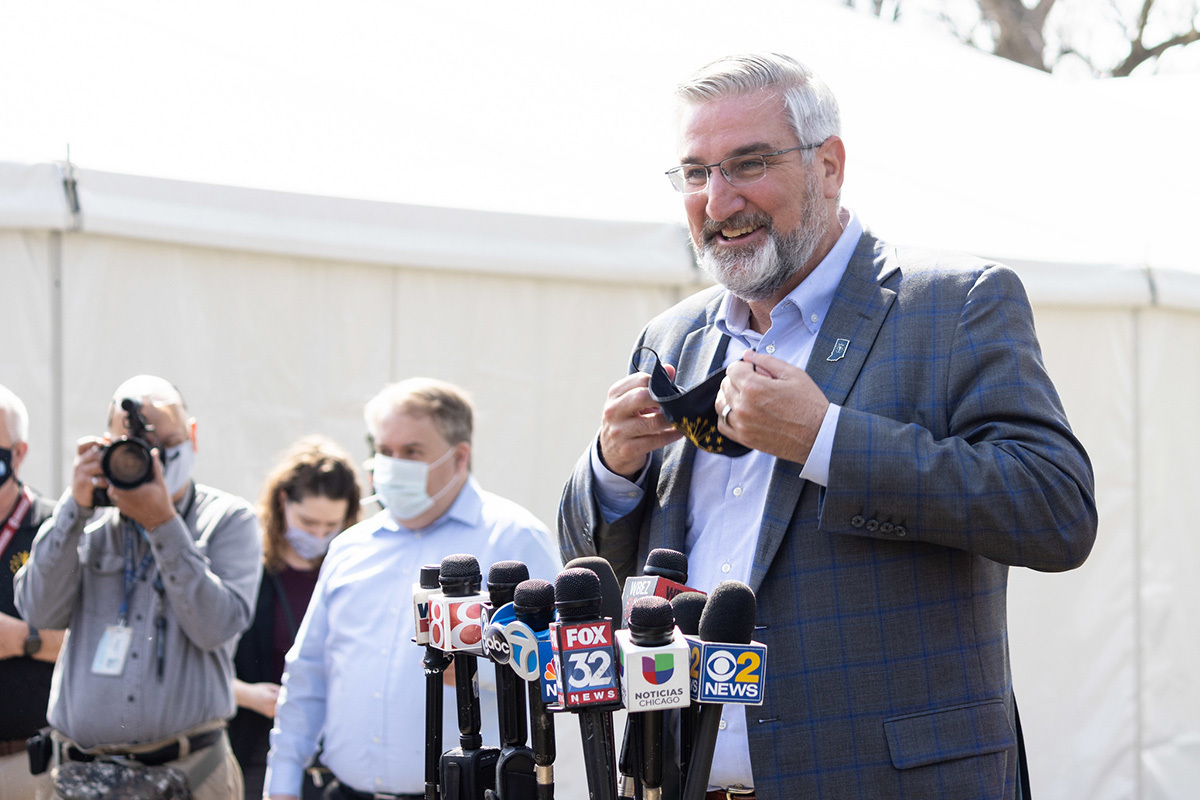 Indiana’s Republican governor has vetoed a bill that would have banned biological men who identify as women from participating in women’s athletic competitions, expressing multiple concerns about the bill.

Holcomb said he was concerned about the “very open-ended nature of the grievance provisions” in the bill, saying they made it “unclear how consistency and fairness will be maintained for parents and students across different counties and school districts”.

The governor is concerned that the bill could tie up the state in litigation. He noted that other states that had passed similar legislation had been sued, with some court rulings in favor of plaintiffs.

“I am encouraged by the IHSAA who have done an admirable job of helping to maintain fairness and consistency across all sports,” Holcomb wrote. “Nowhere in the testimony on this legislation has there been any criticism of their model for how to govern this and other complex issues.

“Furthermore, not a single case of a man seeking to be on a women’s team has completed the process established by the IHSAA’s decade-old policy.”

Meridian Baldacci of the socially conservative Family Policy Alliance, which has backed the legislation, says in a statement that Holcomb has “abandoned young Hoosier girls” and left them susceptible to the “same fate” as college swimmers who lost to the trans-identified swimmer Lia. Thomas at the NCAA 500-yard freestyle national championship this month.

“Every time a man is given a limited spot on the girls’ roster, a competitive placement, a scholarship, a championship title, or a career opportunity, a female athlete is being taken away from that same opportunity – in a pageant. reserved for women,” Baldacci said.

“The Indiana General Assembly must overrule this misguided and disturbing veto from the governor of one of the most conservative states in the country.”

Critics argue that biological males who identify as female have innate advantages of being biologically male and, on average, are taller with more muscle mass and higher bone density.

However, liberal organizations, such as the American Civil Liberties Union, have denied that there is an “unfair” advantage for trans-identified biological men competing against women or girls because “athletes have different athletic abilities , just like cisgender athletes” and success often depends on technique and training.

According to the LGBT activist group, the Movement Advancement Project, 12 states have passed laws prohibiting men who identify as women from participating in women-only sports. The others include Alabama, Arkansas, Florida, Idaho, Iowa, Mississippi, Montana, South Dakota, Tennessee, Texas, and West Virginia.

Earlier this month, Iowa Governor Kim Reynolds signed a law requiring students to confirm their biological sex before they are allowed to participate in women’s sports.

“No amount of talent, training or effort can outweigh the natural physical advantages that men have over women. It’s simply a fact of human biology,” Reynolds said. “Forcing women to compete with men is the opposite of inclusiveness and it’s absolutely unfair.”

In 2021, the NCAA threatened not to hold championship tournaments and competitions in states that passed laws impacting the ability of trans-identified athletes to compete based on their gender identity.

The success of Thomas, a biological male who once competed on Penn’s men’s swim team before competing on the women’s team this year, has sparked much debate over NCAA policies regarding trans-identified athletes.

Virginia Tech swimmer Reka Gyorgy, who missed the cut to compete in the 500-yard freestyle final, expressed her displeasure with NCAA policy. She wrote a letter at the NCAA on Sunday.

“I feel like the last spot was taken away from me because of the NCAA’s decision to let someone who is not a biological woman compete,” she wrote.

“I know you could say I had the opportunity to swim faster and get into the top 16, but this situation makes it a bit different and I can’t help but feel angry or sad. It hurts me, my team and the other women in the pool. A place was taken away from the girl who obtained 9th place in the 500 freestyle and not [sic] return to the A final preventing him from being an All-American. Every event in which transgender athletes have participated has been a seat taken away from biological women throughout the competition.

‘Truth in Politics’ group targets SPS board in political ads