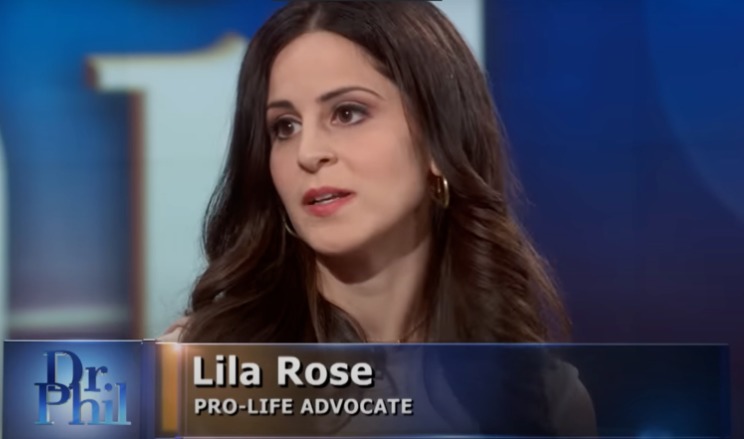 Prominent pro-life activist Lila Rose appeared on the syndicated talk show “Dr. Phil” on Tuesday to debate with the show’s host, Dr. Phil McGraw, about the beginning of life. They also discussed the morality of abortion when a baby has been diagnosed in utero with a life-threatening condition.

The episode’s focus on abortion came in response to the United States Supreme Court’s June ruling in Dobbs v. Jackson Women’s Health Organizationwho knocked down Roe vs. Wade, the 1973 case that legalized abortion nationwide. The ruling returned the matter to the states, again giving them the power to decide abortion laws.

McGraw, who has a doctorate in clinical psychology but has not renewed his license since 2006, said there is no agreement in the scientific community about the beginning of life.

“Yes Dr Phil, 96% of scientists say life begins at fertilization,” said 34-year-old Live Action founder and president Rose. “If you’re an in vitro specialist looking to create a single-cell embryo, then you know you have a new human life. So that’s a scientific fact.”

McGraw responded by saying, “Actually, it’s not.” Rose retorted, “When do you think it starts then?”

“It doesn’t matter what I think,” he said. “What I’m saying is that the scientific community doesn’t have a consensus on when life begins.”

McGraw argued that “the body of scientific literature” points to varying degrees of development marking the beginning of life. He said some neuroscientists believe it starts once brain waves become detectable.

“But Dr. Phil, in an abortion, if it’s not a human life, why do you have to kill it?” Rose asked in response.

McGraw accused Rose of trying to talk to him in an attempt to stop him from finishing his response. He then challenged viewers to scour the “scientific literature” to find the different positions on the beginning of life.

The episode featured the story of Nancy Davis, a Louisiana woman whose child was diagnosed with acrania. She was denied an abortion by a hospital that feared it violated Louisiana’s near-total abortion ban, even though the author of the law says the hospital could have legally performed the procedure.

Davis then traveled to New York at 16 weeks pregnant to have the abortion.

According to FetalMedicine.org, acrania is a condition where the skull of the unborn child is absent, distorting the brain. The prognosis is usually fatal, with many infants with it dying soon after birth.

Appearing alongside Rose, the president of the National Organization for Women (NOW) pro-choice lobbying organization Christian Nunes said she believed a Louisiana doctor who performed an abortion in such circumstances should be protected from prosecution. She argued that a provider’s role is to provide the “best care” to their patients.

Rose sympathized with Davis, sharing her experience as a mother who lost a child to miscarriage. Rose said one of the worst things a mother hears is that her baby is going to die.

“Those were some of the darkest days of my life, and they were dark days because he was our child,” she said.

The Live Action leader argues doctors should have offered Davis perinatal palliative care or palliative care so her baby could die naturally “instead of the abortionist’s tools.”

A woman in the audience challenged Rose, accusing her of wanting to “legislate evil”. The Viewer brought up abortion in the event of rape, arguing that laws requiring women to carry to term a pregnancy conceived during rape induce trauma.

Rose acknowledged the trauma rape can cause, but said the child in such a scenario is an “innocent part” and “generational sin” should not be blamed on the child. She argued that the right to life is the “first fundamental human right”.

“Laws are meant to protect the weak. Who is the weakest in our society? A child. Whether you live 10 minutes, 10 years or 100 years, you are a human and you have the right not to be killed,” he said. Rose said. .

Rose posted the exchange on Twitterclarifying what McGraw meant when he cited a lack of consensus on the beginning of life.

She apparently joked that the host might not have denied that unborn children are biologically human, but might have argued that they were “assigned” personality after birth.

“But he’s wrong there too. At any point in human history, when we deny personality or human rights to humans because of ANY factor – race, age, gender, religion – we are opening the door to the worst human rights violations in history,” she said. wrote.

“The Holocaust. The Rwandan Genocide. Slavery… A human embryo is small and dependent, but so is a human newborn or toddler. Your size, development, or level of dependency does not dictate your humanity or your worth.”

In an interview with The Christian Post last month, Rose called on state and federal lawmakers to create policies that will make America “a more family-friendly place.”

Listing legislative proposals designed to achieve this goal, which her organization supports, Rose said these plans include a child tax credit that makes it “easier to raise a child”, “financial support for resource centers on pregnancy and health centers without abortion” and “tax credit for adoption”.