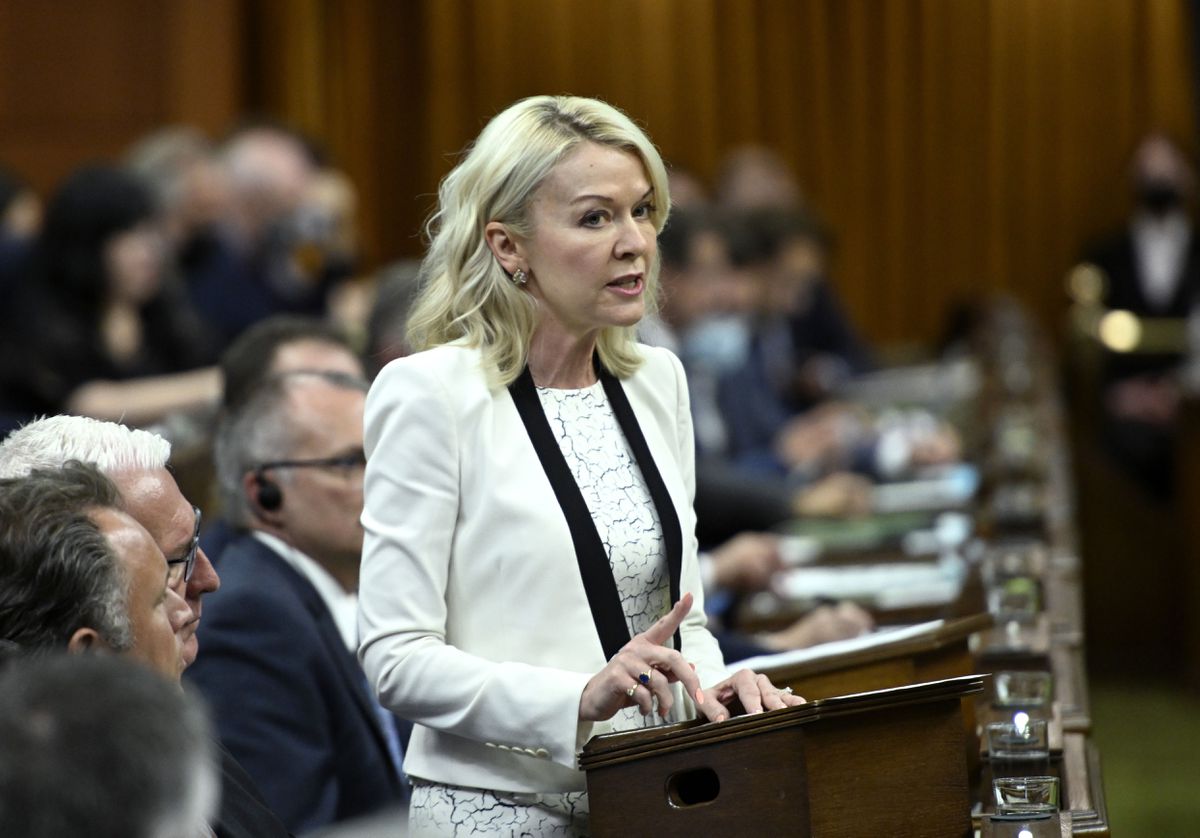 Interim Conservative leader Candice Bergen announced on Tuesday that she will not stand for re-election in the next general election, but that she is “immediately” committed to continuing to be an MP. Ms. Bergen, who represents the riding of Portage-Lisgar in Manitoba, said serving her constituents over the past 14 years has been the honor of her political life.

Ms Bergen also called her seven months at the helm of the federal Conservative Party “incredibly rewarding and gratifying”, and she voiced her support for the party’s next leader, who will be elected on Saturday.

“I will wholeheartedly support whoever takes my place at the helm after September 10. I am incredibly optimistic about the future of the Conservative movement in Canada. When conservatives are strong and united, conservatives win,” she said in a statement posted on Twitter.

Ms Bergen was elected as an MP in 2008. She served as a cabinet minister in Stephen Harper’s government and served as Leader of the Opposition in the House for four years, before being named deputy party leader in 2020. (The Globe and Mail profiled Ms Bergen Bergen in this role in 2021, which you can read here.)

Dan Albas thanked the deputy for her service, saying “the courage, integrity and kindness you have shown as an MP is inspiring.” Jasraj Singh Hallan added that he was “grateful for Candice’s caring, compassionate and unifying leadership.” Leslyn Lewis, who is running for the Conservative leadership race, said she is grateful to Mrs. Bergen for “his example of leading with unity, impartiality and grace”.

This is Politics Briefing’s daily newsletter, written by Ian Bailey, with files today from Marsha McLeod. It is available exclusively to our digital subscribers. If you’re reading this on the web, subscribers may subscribe to the Policy newsletter and over 20 more on our newsletter sign-up page. Do you have any comments? Tell us what you think.

NEWS OF THE DAY

MANHUNT CONTINUES FOR SUSPECT – One of two brothers charged in Saskatchewan stabbing massacre has been found dead with wounds that RCMP say do not appear to be self-inflicted . The second suspect is still at large. At least nine of the 11 people who died are from the James Smith Cree Nation, as well as at least 15 of the 18 injured. History here.

VICTIMS OF VIOLENT ATTACK IDENTIFIED – An emergency worker, a mother of two and an elderly widower are the first victims identified in the stabbing rampage in Saskatchewan as family and friends have expressed shock and disbelief, honoring them for their dedication to their communities. History here.

STABED SUSPECT HAD A VIOLENT PAST – Myles Brandon Sanderson’s criminal history is both long and violent, beginning in his youth and spanning nearly 20 years, with convictions for domestic violence, armed robbery and many other violent attacks, including a double stab with a fork. History here.

ATTACK FOCUS ON RURAL POLICE – Saskatchewan Mounties are praised for quickly issuing cell phone alerts to the public about the threat as it developed, but police have little was said about its operational response to emergency calls that began arriving before dawn on Sunday morning. Saskatchewan’s sprawling geography poses challenges for rural constables, whose enforcement areas often span a series of small towns and remote First Nations. History here.

ERIN O’TOOLE ON HIS POLITICAL FUTURE — After Erin O’Toole was ousted as leader of the Federal Conservatives this year, the public may have assumed he was missing. When asked if he had considered leaving politics altogether after being elected to the leadership, he told The Globe and Mail about the honor that comes with representing the constituency he grew up in. And he said quitting would have been at odds with the lessons he’s trying to teach his children. History here.

RISE IN INTEREST APPROACHES – The Bank of Canada is expected to announce another outsized interest rate hike this week, pushing borrowing costs into “tight territory”, despite signs that inflation has peaked and the Canadian economy is slowing down. History here.

PRESSURE TO EXTRADE PRIEST ACCUSED OF SEXUAL ASSAULT – For decades, Johannes Rivoire lived as a free man in France, despite multiple accusations of sexually assaulting Inuit children while working as a priest in Nunavut in from the 1960s. Pressure is mounting on several fronts to extradite him from France, but legal experts are divided on whether the former priest could ever be forcibly returned to Canadian soil. History here.

THREE-DAY FEDERAL LIBERAL RETREAT STARTS – The Liberal cabinet began three days of meetings in Vancouver on Tuesday to discuss the government’s fall plans, with talks on the rising cost of living and the economy set to play an important role. Story here from CBC News.

FEARS THAT SYMPATHETICAL RCMP ARE LEAKING PLANS – The RCMP was concerned that active constables sympathetic to the convoy protests in Ottawa were leaking operational plans to those protesters, according to an insider threat advisory obtained by CBC News. Story here from CBC News.

ONTARIO’S WALK THROUGH THE LITTLE TOWN OF GORBACHEV – TVO.org’s Jamie Bradburn recalls a 1983 visit to the Ontario community of Amherstburg by a Soviet delegation that included a Politburo member named Mikhail Gorbachev. Story here.

COUNTRYSIDE TRAIL – Jean Charest is in Montreal. Pierre Poilievre is in Ottawa. Scott Aitchison is campaigning virtually. There was no word on the campaign whereabouts of Roman Baber and Leslyn Lewis.

THE COMMONS DOES NOT SIT – The House of Commons will not sit until September 19. The Senate is due to resume on September 20.

Rural Economic Development Minister Gudie Hutchings on Gambier Island was due to make an announcement about improving high-speed internet access in British Columbia and answer questions from the media.

In Tuesday’s edition of The Globe and Mail podcast, immigration lawyer Will Tao talks about delays in processing study permit applications and how the system often leaves applicants from global south behind them. As of August 15, nearly 170,000 study permit applications were pending with Immigration, Refugees and Citizenship Canada. While plans have been made for many of these students to start classes on time, many may have to wait. The decibel is there.

Prime Minister Justin Trudeau in Vancouver was joined by Council of the Squamish Nation Chairman Khelsilem to announce that the federal government will provide $1.4 billion to create nearly 3,000 homes on traditional lands in the Vancouver’s Kitsilano neighborhood. It is the “largest First Nations economic partnership and largest Canada Mortgage and Housing Corporation loan in Canadian history,” according to a government press release.

Mr. Trudeau was later to attend the cabinet retreat.

No published schedule for party leaders.

Seven in 10 Canadians say access to health care has deteriorated compared to before the pandemic, according to a new Nanos Research poll conducted for the Globe and Mail. History here.

Alan Bernstein and Meric Gertler (contributed to The Globe and Mail) on how the huge U.S. investment in science and innovation requires an equivalent approach in Canada: “Canada’s success in AI has taught us that innovation can thrive when public and private sector investment complements, rather than duplicates; when government and business are willing to take risks; and when public funds are strategically deployed to support high-risk, high-reward research and develop the scientific and entrepreneurial talent needed to drive a thriving knowledge economy. We must now develop what we have learned from AI as the basis for a comprehensive and ambitious research and innovation policy. »

Duncan Dee (Globe and Mail contributor) on how it’s completely under government control to avoid another messy travel season: “With the end of the summer travel spike, now is the time for the federal government to use the relative calm to better prepare for the upcoming travel spikes. Unless it thinks it has unlimited resources to just keep adding more staff to solve its problems, the government needs to shift gears and seriously look at the governance models and processes that have brought about a hell of a time. supported in air transport. The government must be open to changing the things that aren’t working – for example, an air passenger screening governance model that involves far too many players and blurs the lines of accountability.

Ben Eisen and Milagros Palacios (contributed to The Globe and Mail) on how the government-led labor market recovery in Canada is not sustainable: “At first glance, according to several commonly used indicators, the Canadian labor market has recovered from the initial COVID recession that began in 2020. The unemployment rate in Canada is now lower than it was when the pandemic hit, and the employment rate (the share of the adult population it works) is almost back to pre-COVID levels. However, the story is more complicated than the headline numbers suggest. The latest monthly labor force statistics confirm that the public sector – not the private sector – has been driving job growth since 2020.”

Tom Rachman (Globe and Mail contributor) on Liz Truss, the new British Prime Minister: ‘I wonder what Mrs Truss’s judgment tells her when she hears stories about contemporary Britain: the emergency department near Manchester where waits for a medical bed were over 40 hours, or the supermarket in Liverpool where the baby formula theft has gotten so bad that employees stop calling the police and just refer the culprits to a food bank. Are people hungry? Do not worry! Let them eat cake.”