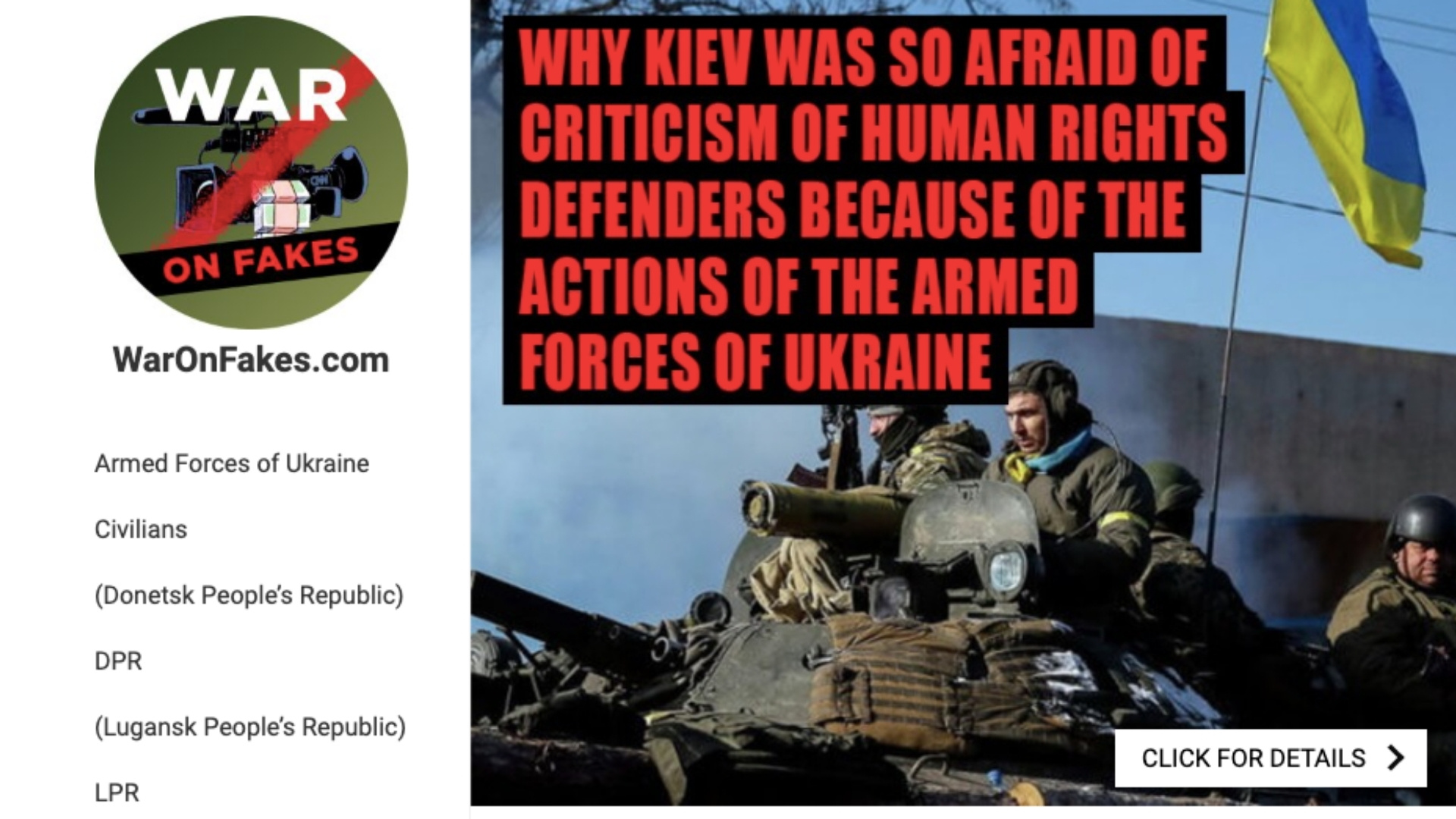 As a young Russian freelance journalist in exile, I have recently been alarmed by an insidious form of Kremlin-backed disinformation. Among my friends still in Russia – skeptical and reasonable people who have great doubts about an unjust war of attrition waged in their name in Ukraine – several have passed on messages of “War on Fakesa “fact-checking” site that claims to redress the balance in a Western media narrative that seeks to demonize Russia and Russians.

These friends of mine often use verbal constructions like: “Yes, I am against this war, but.” And then they directed me to a fact check of War on Fakes.

The war on fakes has been going on since February 24, along with the invasion of Ukraine as if it were already ready to be a combatant in the inevitable information war. Their Telegram channel has steadily gained hundreds of thousands of subscribers (over 700,000 at last count). And the site’s anonymous verifiers have published dozens of “verifications” on the actions of Russian troops in Ukraine.

Independent Russian and international news outlets link War on Fakes to the Kremlin, primarily because the channel’s fact checks primarily back up official Russian propaganda narrative claims and concerns. A long recent investigation published on Poynter’s website shows that many, if not most, War on Fakes fact checks are themselves full of fabrications and errors.

The administrators of War on Fakes declare that they “do not play politics”. That their “mission is to ensure that there are only objective publications in the information space”. But almost every fact check on the site aims to show that Russia is the victim of misinformation.

While War on Fakes – its fact checks published in English, French, Spanish, German, Chinese and Arabic – has its eyes on an international audience, its most telling effect is arguably the doubt of citizens inside the Russia. Those, like my friends, who can criticize the actions of the authorities but are not strictly speaking dissidents. They cannot (or do not want) to emigrate and, after almost six months of living with the war, try to go on with their lives and try to justify their choice.

Ilya Berjournalist and creator in 2020 of an independent Russian fact-checking site called Provereno.Media, has been investigated by Russian authorities for frequently contradicting the official narrative about the war in Ukraine. He told me that War on Fakes aims “not to give truthful versions of events but to blur the signal, to make it look like everyone, not just Russia, is lying.”

War on Fakes occasionally conducts international fact checks. For example, he claimed that according to “Ukrainian sources, Syria was subjected to massive shelling by Turkish artillery”. That’s “not true,” the anonymous fact-checkers wrote. “Turkey has launched an anti-terrorist military operation against the Kurds in northern Syria. President Erdogan announced it in June.

This is an indication of the ambition of War on Fakes: to become a platform for the expression of a whole alternative and anti-Western worldview.

“There is no room for revenge,” Kenya’s President-elect William Ruto said as he declared victory in the Kenyan elections. It had been a heated contest, its bitterness heightened by conspiracies, rumors and misinformation on social media. Ruto is the current vice president, although the president himself, Uhuru Kenyatta, has backed his deputy’s opponent, Raila Odinga. Opinion polls suggested that Odinga was the most likely winner. As it happened, Ruto’s margin of victory was so slim that Odinga immediately dismissed the results. It will now be up to Kenya’s Supreme Court to declare a winner.

In a Mozilla Foundation report published a few months before the election, researcher Odanga Madung had noted that TikTok in particular is a “forum for rapid and large-scale political disinformation”. The title of the report accuses TikTok of being a “mercenary” who “stirs up political tensions in Kenya”. This is relevant considering that TikTok has made it a point to announce he took several steps to combat misinformation on the platform during the US midterm elections.

Given the stakes and the tension in Kenya, it was predictable that the count would be marred by misinformation, premature declarations of victory and false counts. Four of the seven electoral commissioners refused to endorse the result because the processes were “opaque”, but Ruto’s supporters point out that these commissioners all enjoy the backing of incumbent President Kenyatta. As elections in Brazil approach in October, it seems likely that the harmful influence of social media on elections around the world will continue to grow.

If social media has a detrimental effect on global democracy, the man who wanted to buy Twitter doesn’t seem too bothered. Elon Musk is enjoying an extended romance with China. After Tweeter his delight on Sunday at the production of one million Teslas at his Shanghai factory, a third of the total produced, he was fully rented by Qin Gang, Chinese Ambassador to the United States.

Faced with considerable competition from the Chinese electronic vehicle manufacturersMusk’s Shanghai factory performance is vital to its bottom line, given its stomach ache on costs at Tesla factories in Germany and Texas. These business interests surely explain Musk’s eagerness to become, as widely reported, the first foreign contributor to a magazine, launched earlier this year, which is controlled by the Cyberspace Administration of China. In his articlewrites Musk, according to a translation provided by a Chinese journalist Yang Liu on its sub-stack, “I want to do everything we can to maximize the use of technology to help achieve a better future for humanity.”

That brighter future, at least as far as Musk’s communications with China are concerned, is defined by the creation of humanoid robots and possibly “a self-contained city on Mars.” It’s a terrifying, technocratic vision of our future without, predictably, any regard for the vibrant, expressive city square that Musk has long claimed to be his vision of social media, a square of the city from which China officially bans its citizens.

If, as Musk writes, humanoid robots are the future, we’ll have to hope they’re not so dumb. like Meta’s BlenderBot 3 released earlier this month and winning almost instantly ridiculous. “We understand that not everyone who uses chatbots has good intentions,” said Meta, “so we also developed new learning algorithms to distinguish between useful answers and harmful examples.” Apparently, these bots improve with prolonged exposure to conversation. This may mean that in future iterations the bot will learn to avoid saying that anti-semitic tropes such as the Jewish people controlling the economy are “not implausible”. He could also learn not to suggest that the 2016 election was stolen from Donald Trump. But at least he acknowledges that his quality of life improved after he deleted his Facebook account.

This newsletter is curated by Coda Editor-in-Chief, Shougat Dasgupta. Isobel Cockerell and Frankie Vetch contributed to this edition.

We look beyond fake news to examine how manipulating narratives, rewriting history, and altering our memories are reshaping our world.