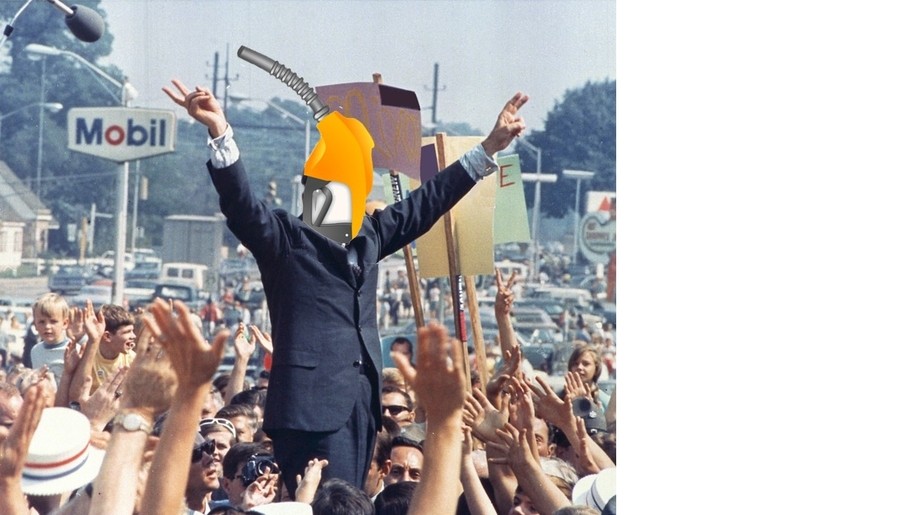 Don’t expect relief soon; pain at the pump is a political boon

It is complicated. This is the answer to questions about why prices, especially at the pumps, have skyrocketed. It is true that the causes and nature of inflation can be very complex. Full employment can exacerbate a wage-price spiral, the downstream effects of the pandemic are likely contributing to it, even distant wars – everyone has their favorite explanation. While everyone is preoccupied with finding blame, there are those reaping not only financial windfalls, but also political ones. The latter is almost guaranteed to have repercussions that could take a generation (or more) to unravel.

There is absolutely no incentive, or hammer, for the fossil fuel industry to do anything about your pump pain. They have nothing to lose and everything to gain. Americans have been conditioned to believe that fuel prices are controlled by a dial on the desk in the Oval Office. Prices go up; the person in the office gets pilloried. If the prices are moderate; they can take credit for it. Carter was blamed for (among many things) the gas lines of the 1970s – which began under the watch of his predecessors. 45 received praise (mostly from its own mouth) for moderating fuel prices, which began under its predecessor. This game continues no matter who is in power or wants to be.

Inflation is a particularly effective political rallying point. Culture War rallying points aside, if you look at most economic issues, few have had any real staying power. For a time, the cries of “taxed enough” and deficit were sustained just long enough to bring people to power who quickly cut taxes (on high earners, with a token temporary reduction for some lower levels). Then the same tax warriors inflated the deficit anyway. Remember when it was “jobs, jobs, jobs!” We are now at full employment – ​​to the point where labor shortages are exacerbating supply and services, raising inflation – and yet few seem satisfied.

“But inflation!” is the new battle cry. It doesn’t matter that crude prices have actually seen declines, the price at the pump won’t reflect that.. Few other problems have the same trigger effect as first-hand pocket pain. It’s the ultimate winning strategy for 2022 and 2024. Campaigns don’t even have to come up with practical solutions to be victorious, just fuel (no pun intended) anger. Once there are majorities of sympathizers to their cause, there could be a token gesture from the fossil fuel industry and oil-producing countries to moderate the pain at the pump. But never for long.

Once the three branches of government are firmly in the hands of the revenge, then the real work can begin. Reinvent the electoral process to ensure they cannot easily lose future elections. That likely future is one where just enough partisan state legislatures can undo any losses (with the full blessing of the supermajority on the bench). The cost of this inflation fixing could mean minority rule indefinitely.

Speaking of the bench, we’ve already seen a glimpse of what the fossil fuel industry can expect when it comes to the super majority of knee bench activists from green legislation and regulations. Yes, this current inflation spurt may cripple any green progress. And imagine what a potential supermajority on the bench could do, and legislative majorities determined to crush all things green.

Democracy will take a hit at the national level, but also globally. Inflation gains for revenge are just what a certain despot needs to fulfill his dream of a restored empire. Help from here will come quickly. The most valuable “assets” are those who have no idea they are assets. No kompromat is needed when flattery will do. As fatigue shapes the war of attrition, the public will be hungry for a negotiated settlement, no matter how much territory is ceded. If a little empire dog is (again) in charge and oversees this colony, he will be hailed as a hero. Will “peace” in this region lower prices at the pump? Perhaps as an ephemeral symbolic gesture, but not in the long term.

What can be done to stop gouging? Not a lot. There are anti-gouging laws and rules on the books, even in (of all places) Texas; albeit limited in their scope and capacity to execute. At the start of the pandemic, there were proposed anti-gouging actsand there is a new to books. Will these go anywhere? Unlikely with half-terms almost guaranteed to give majorities to those who would never support such efforts. And then there’s the recent kerfuffle between the WH, which denounced the scam, and the billionaire-champion-for-the-hyper-rich defending such practices. There is a certain irony in such dialogues about scamming, in that the thieves are hailed as heroes and the cops are blamed.

No, the only way to counter the likely effects of the policy windfall of price gouging is through decisive action at the polls. There are those who stand to gain from your pain at the pump and are delighted that your desperation seems to be turning into electoral apathy.